In a first for Sussex Schools AA, their annual Combined Events fixture at K2, in which Surrey Schools AA has participated for the last few years, became one joint competition for places and medals.

In dreary weather the turn out from both county’s was disappointing, with Sussex fielding no athletes at all in the Junior Girls pentathlon event, which may well also be a first. 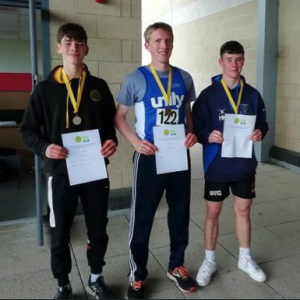 Considering Kirwan only started athletics last year, competed solely as a sprinter and has not trained for athletics this winter, the performances show promise. His final score was 2097, behind Surrey’s Barnaby Corry on 2132 and George Asprey’s gold medal total of 2637. 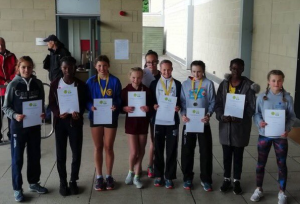 For year 7 athletes there is a quadrathon. The girls event was the most competitive of the day, with 10 entrants across the two county’s. Brighton’s Dulcie Yelling , the recent winner of the under 13 Minithon at the county championships, came third with 1792 points behind Arabella Wilson and Sienna Kidd. Kidd had the smallest winning margin of the day scoring 1933 to Wilson’s  1925.