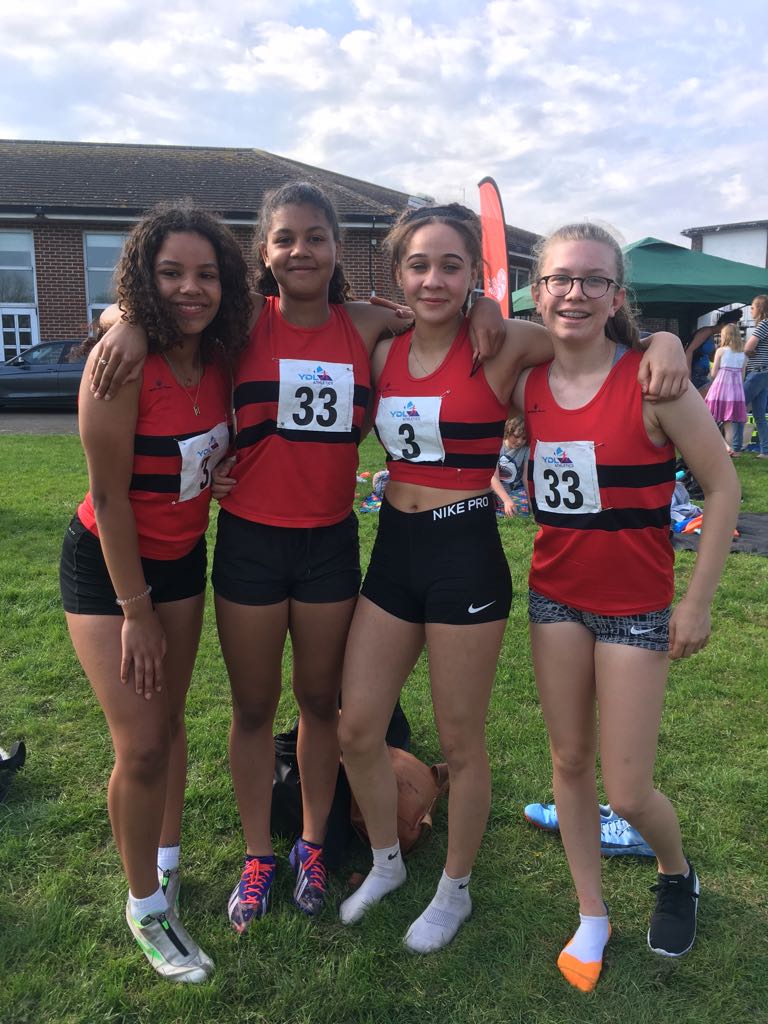 On a glorious Saturday, bathed in sunshine, Brighton & Hove AC’s younger athletes came out in force for the first of the 2018 Track & Field Youth Development League (YDL) fixtures.

Thirty Under 15 athletes and 28 Under 13’s made their way to Lewes and with only a gentle breeze running through the exposed track, the youngsters could not have asked for more perfect conditions. They did not disappoint winning the fixture by 136 points from Medway and Maidstone.

Personal Bests were set throughout the day and amongst many exciting performances, Harvey Grant’s 800m debut in 2:09.3 for second place in the ‘A’ race, 1500m runner Rebecca Losh’s point-scoring pole vault clearance after one lesson and Archie Rowles sportsmanship – volunteering to run a vacant relay leg just seconds after a tough battle in his 1500m race, were some of the stand outs.

Ruby Anning ran her second English Schools qualifier over 200m for the win and was runner up in 12.8s in the 100m before anchoring the 4x100m squad of Bea Dalley, Blossom Campbell and Lena Dornbusch to victory. Katie Ridley, a first year in the age group, set personal bests in the High Jump, Hurdles and 300m as well as running a leg of the 4 x 300m relay. Danny Giustiani raced to bests over the 200m and 300m, as did Michael Shaw in the latter after a fine hurdling display earlier in the afternoon.

Ella Matthews and Tatum Walker completed a double, winning the ‘A’ and ‘B’ 800m. Tatum also won the ‘B’ javelin in a PB. Lacey Fowler and Thomas Wells both cleared bests in the High Jump to bring in valuable points and Thomas also gamely saved the day by stepping up to the Long Jump after Arthur Haines was forced to withdraw with an injury. Arthur’s twin sister Ruby, who was making her outdoor debut in the Long Jump, achieved a PB of 4.42m as did Lena Dornbusch who won the ‘B’ Long Jump with 4.40m and the 200m ‘B’.

Jess Corbett, better known as an endurance runner, threw a PB in the shot and Emma Carter set a new best in the hammer with 27.96m. Eadie Yelling showed promise over the hurdles and bagged a second place in the ‘B’ Hammer. Her twin Henry was the first ‘B’ runner home in the 1500m and Poppy Palmer-Malins, in her first track race for the club, won the girls ‘B’ race over the same distance. George Taylor wasn’t far off his PB in taking the 800m ‘B’ win in a time of 2:21.5s

First year U15 Rachael Wall was second in the ‘A’ javelin with a new best of 28.15m and there was a win for Bruno Baker with 32.51m PB in the boys event. Will Jump is a newbie to athletics. His first competition was last September but he is a fast learner and at Lewes won the discus with his first 30m plus throw of 30.44m.

There were several newcomers both to track and field and to the age group and the old and new teammates gave each other great support.

For some of the club’s youngest athletes this was their first ever athletics competition.

Each point counted and we amassed plenty. Almost everyone went home with a personal best in at least one event.

Some special mentions for contributions. Amber Purcell was a triple winner and achieved PB’s across the board, including an impressive 4.24m in the long jump. Amber also ran a storming 3rd leg of the relay.

Noah Mason, in his first year, also competed in three events and a relay and ran an impressive 13.9s in the 100m.

There was an abundance of great performances but two in particular that stood out were huge throws. Both were PBs and take the respective athletes into the UK Top 10 for the age group. Dulcie Yelling launched the javelin to 30.40m and Kathleen Kearney putted the shot out to 9.52m.

Well done to all the athletes who competed scoring and non-scoring and thanks to your families and friends who were vocal Team B&H supporters. The full results can be found HERE. The next YDL fixture is on Saturday 19th May again at Lewes.