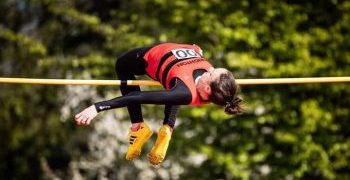 Brighton & Hove’s Jo Wilding and David Spencer were two of the stars of the British Masters Championships taking a total of five titles between them.

Competing in Birmingham last weekend, in the W45 age group, Wilding won the 80m hurdles final in a time of 15.16s into a -3 headwind and repeated her winning ways in the 400m hurdles crossing the line in 79.47s. In between she slipped in a high jump title clearing 1.35m for victory. It was a busy weekend for the B&H Veteran women’s team manager as she was just out of the medals coming fourth in both the 400m and the 200m finals. 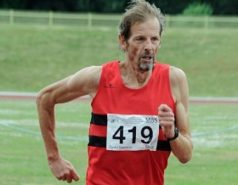 On Saturday in the 400m, newbie V70, David Spencer had an easy win in the quarter mile, finishing almost three seconds ahead of the silver medallist Banbury AC’s Bruce Hendrie’s with 68.38s to 71.01s.

However, Sunday’s 200m was a much closer affair for Spencer.  In a sprint battle which came down to the wire he secured the title by a mere one hundredth of a second in 29.58s – a vest thickness – ahead of Southampton’s Victor Novell. 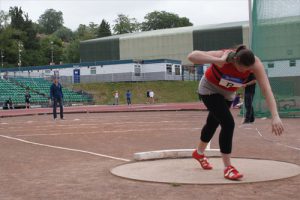 SAL team manager Sarah Hewitt was another athlete on a mission. Competing in FOUR events, V45 Hewitt was a double silver medallist in the weight throw with 10.38m and discus with 34.40m, secured a bronze in the hammer with 29.53 and was also bronze medallist in the V45 Shot with 8.80m.

Tracey Brockbank was fifth in the W50 Hammer with 28.69m and fourth in the javelin with a best of 20.83m. Meanwhile Dave Roberts was sixth in the M50 Triple Jump with 9.91m.

This was one of the best showings for our club at the British Masters Championships for some years.  Well done to all the athletes who competed.