What If? by Reg Hook 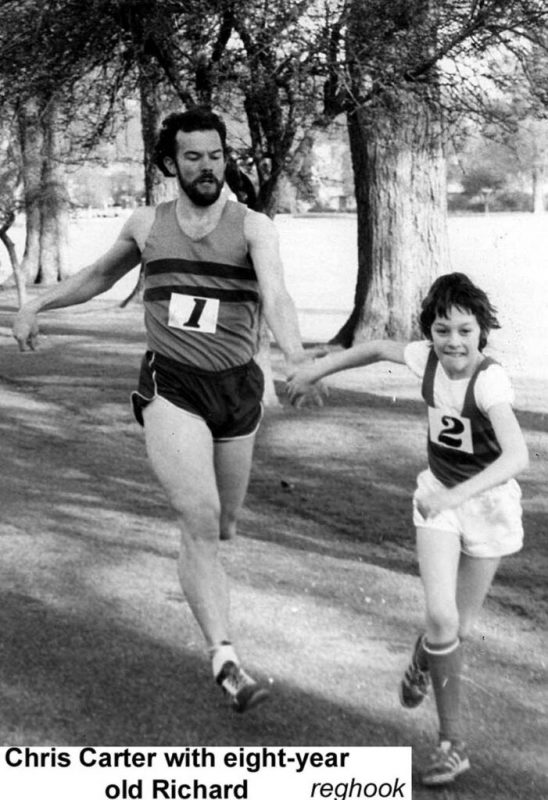 “What if” is a frequent quote heard after athletic careers or events if they do not go completely to plan, and although the late and much revered Horsham distance runner and Sussex one-mile record holder Bob Grosse would say never say “What if” but always “What is”.

Three “What ifs” could easily apply to this week’s profile. An untimely broken ankle – when is a broken ankle ever timely, a spell in Canada and bladder cancer combined to prevent Richard Carter in achieving the Olympic glory that his father Chris attained back in the sixties.

Richard Adrian was born on 21st June 1965, to Christopher and Elaine Carter from Steyning, who were both middle-distance runners. He attended Patcham Fawcett and Varndean Sixth Form College before going on to Loughborough University.

Although he won the Brighton Schools Primary Cross-country championships in 1976 running did not figure any more on his scene than it would other primary school pupils.

Without encouragement from his British half-mile record holder father, Richard began to make an impact on Sussex Young Athlete competitions, and just missed making the Sussex Schools junior boys cross country team in 1979. However, one year later he gained his first Sussex county vest and placed third in the Sussex Schools Inter (U17) race. Richard only finished 122nd in the English Schools but he was able to watch Brighton & Hove club-mate Andy Bristow finish sixth and lead the Sussex Schools Senior boys to their first team victory in this event. On the track in 1980, he clocked 9:06.4s when he was squeezed into second place at the SEAA 3,000m champs after leading until the final stages.

Richard confessed that “It was 1981 when I really became a competitor and believed in myself”.

After a steady cross-country season when he finished fifth in the Sussex Youths XC champs and fourth in the Sussex Schools Inter Boys’ event, and even after falling at the start, placed 21st in the English Schools. The track season saw him win the County 3000m title in a PB of 8:52.0s and the next day finish fifth in the 1500m with another PB. He repeated his victory over 3000m at the Sussex Schools with another PB and Championship Best Performance of 8:41s. A second place in the English Schools Inter race followed, and another second place in the South East Inter-county match 3,000m at Withdean in 8:35.4s, which was then a Sussex Youth Record.

1982 started well with first place in the Sussex Youths XC and the Sussex Schools Senior champs. This was followed by fourth in the CAU Inter-counties and Richard led the Sussex team which also placed fourth. Whilst a victory in the Southern Youths Championships created Sussex history as he was first Sussex runner to win the title at these championships.

Richard also finished fifth in this his first year as a senior in the English Schools XC championships and in his first track run of the season just missed the British age 16, 5,000m record when clocking 14:33.2 in the National League.

In July he won his first English Schools senior 5,000m title in 14:41.5s and, in August, finished second for GBR against West Germany at Birmingham in 8:25.6s.

1983 was the year Richard faced his first battle with Olympic Bronze medallist to be, Mark Rowland who was still then with the Bognor club.  They clashed in the Sussex cross-country League race at Denne Park, Horsham. Richard however, had to settle for second place but not behind Mark but his namesake Paul Rowland (Horsham), though he managed to finish well clear of Mark’s third place.

Early in the year he took second place in the SEAA junior XC champs and followed this with ninth place in the National and tenth in the World Junior Champs at Gateshead. He also helped England into the bronze medal position in the team event, then won the English Schools Senior XC title at Chesterfield, the only Sussex runner to win this crown.

In July at Plymouth, he was to retain his England Schools 5,000m title just one of five Sussex Boys to retain an English Schools track title and is still champion as the distance was reduced to 3,000m in 1984.

1984 should have been Richard’s best year to date and it started well with wins in the South of England Champs at Parliament Hill and the San Sebastian Junior International event, well clear of the Spanish athlete Pere (Pedro) Casacuberta who was to go on and win the World title in April.

Richard was to become only the second Sussex Runner to win the National junior title in March, Steve Ovett had become the first Sussex winner a few years earlier, and Richard was to be defeated by Ovett, his only defeat of the year so far, in the final Sussex League race of the season. Richard, however, had won the previous three races and secured the League title.

On a training run on the Downs while training for the World Cross-country championships where he was the odds on favourite to take the junior crown, where he would have been the first British runner to do so, Richard broke his ankle and had to withdraw. It is a heartbreaking injury, as the Spanish Runner Pedro, who Richard had beaten earlier in the season, is the last non –African athlete to win the Junior XC title.

It was three months of rehabilitation before he could start jogging but he had regained enough fitness to finish second in the AAA junior 5,000m championship, and in September he finished fourth in the GRE cup final 10,000m in 30:30.67s a Sussex junior Record.

In October it was off to Loughborough but for the next four years competition was pretty sketchy though he did make the final of the British University Sports Association (BUSA) 1,500m in 1985 and in 1986 he finished second in the BUSA XC and another second, beh

In 1988 he cut back on running to complete his teaching degree and started teaching in Surrey, and 1989/1990 saw him working at the newly opened Broadbridge Heath Leisure Centre and the Portslade Sports Centre but running again, though the competition was occasional.

Late 1990 Richard was off to Canada for a few years and spent several mainly coaching for Running Room Shop, but it did not work out and he returned home in 1997 and started running again.

By 1999 he was at the top of Sussex athletics again and won his second Sussex Cross-country League title, 15 years after his first League title and he chalked up some fine runs in long-distance road races and even clocked 2:44:54 in the London Marathon in 2000. But this was the year that Richard was again injured and to all intents and purposes gave up competitive athletics but not running.

He took over the team management of the Brighton & Hove Southern Men’s League team in 2001 and added Sussex County management for the C.A.U championships one year later. This he combined with a teaching career at City College, Brighton and then at Varndean College.

In 2005 Richard was diagnosed with bladder cancer, which required major surgery.  The prospect was daunting, but Richard decided to delay the operation as wife Fran was awaiting the birth of their second child, Ben, a brother for Emma. After Ben’s birth in March 2006, Richard went straight into the Sussex County Hospital.

It was touch and go whether Richard would survive the 10-hour operation carried out by Dr Larner and Mr Thomas, who removed the bladder and remodelled one metre of his bowel to make a new bladder. He spent three weeks in hospital and four months recovering at home.

He said he would run a marathon again, and a year later he completed the London marathon in 5:24:00 with a bionic bladder and carrying two Cancer Research collecting buckets to raise £6,000.

Richard won Sussex Sports Coach of the year in 2007, the same year as Sussex won their only C.A.U League title, and he took his club team to win Division One of the Southern Men’s League. It was also 2007 when he helped start the Hove Parkrun, which was then only the fifth Parkrun to be set up in the Country.

He continued team management taking both the Brighton & Hove teams into the final of the British Athletics League Cup in 2011 with the Men finishing sixth and the Women winning the “Plate” competition.

After entering the Southern Athletics League in Division three in 2012 the team progressed to Division two in 2013 and the top place in Division one in 2014, before bringing the management side of his athletics to an end. But not quite, Richard is still manager of the Brighton & Hove Sportshall League team, and has taken on the Presidency of the Brighton, Hove and Portslade Athletic Association, but has not much to do since his elevation to President in 2019.

Since starting Withdean Athletics Academy at Withdean in 2012, he has helped coach hundreds of young athletes up to the age of 12-years-old to begin their athletics career. He still coaches the U11s and U13 squads at Brighton & Hove A.C which he says is: “One of the most rewarding parts of my whole athletics journey”.

For 12 years Richard has been the Start Manager at London Marathon, and this led to him working at the London 2012 Olympics and World Champs in 2017