Nine points secured Brighton and Hove’s Under 13 team victory at K2 on Sunday as the youngsters beat their great rivals Crawley to retain the Sussex League Cup. In warm conditions 10 teams from the East and West of the county came together for the annual battle for top honours. B&H had won a rare victory over Crawley last year by just two points  – the closest margin in 21 years – and Sunday was set to be as tight.

For weeks Team Manager Pete Witcomb had been pulling his hair out, working out where both teams were strong and weak.  He was not sure what would happen on the day, knowing it could go either way depending on who was available, on form and who from other teams could split the results.

From the start the battle was only between the champions of the East and West – Brighton and Crawley.  There were some stunning performances and serious multi-tasking. Well done to Danny Ross-Horton who competed simultaneously in the Long Jump and Javelin, sprinting back and forth between the two!

Every athlete’s points were valuable, whether they came first or last. Congratulations to all the team and thank you to Pete Witcomb and all the U13 coaches.

Full results on the following link: 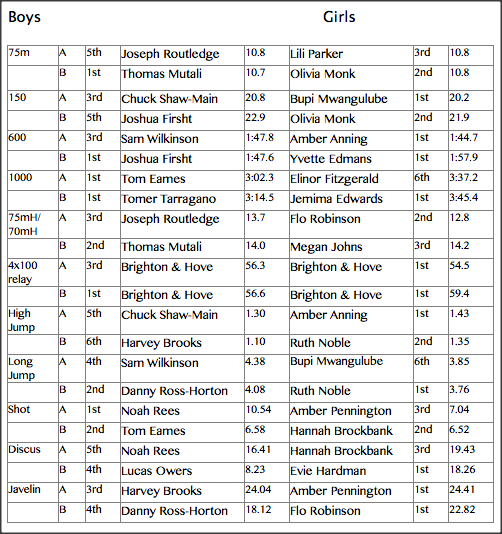