Seventeen year old Stephen Ferroni has been selected to run for the England Junior cross-country team next weekend. The Brighton & Hove youngster will be competing at Atupuerea in Spain on Sunday and at, seventeen he is at the bottom end of the age group. Last month, at Goodwood, he just failed to become the youngest ever winner of the senior race at the Sussex Cross-country League. He was beaten into second place by Chris Zablocki a visiting American athlete. Last season Stephen seemed assured of second place in the Intermediate (U17) race at the English Schools championships when he collided with an iron post in the finishing straight and failed to complete the course.

A second Brighton & Hove athlete will also be on International duty next weekend when Peter Witcomb dons the England vest in the annual Master’s cross-country match in Dublin. Witcomb is now better known as a coach and the Brighton & Hove U13 team manager, but he is a holder of a gold medal for the National Junior Cross-country team championship and a frequent Sussex team member. Witcomb is one of the leading O65 runners. 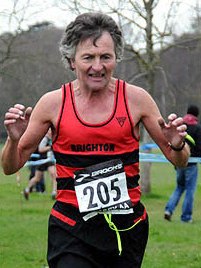