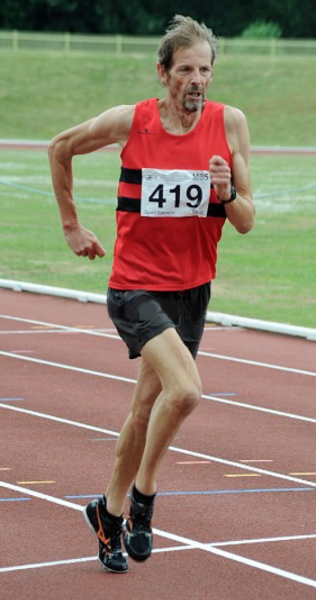 The National Masters track and field championships was held on 7th and 8th March at Lee Valley. More than 600 athletes took part travelling from as far away as Inverness, Cornwall and of course Brighton.

With four of the five Brighton and Hove athletes having completed their events, it was M35 Paul Howard who stole the show winning his first National Masters title in the M35 800 metres category. But it was close. In fact his victory was measured in thousandths of a second, both athletes running 2:06.66.

There was no such luck for David Osman our M85 new boy. Competing for the first time he was unfortunately disqualified in the 400 metres for a lane infringement.

F45 Jo Wilding scooped up three medals in her events but with World class Diane Norman (sister of our own elite coach and athlete Julia Machin) in the same age category the gold was inevitably only going to go to one person.

M70 David Spencer won both the 400m in a Championship Best time and the 200m by large margins.

Our former athletic great Nigel Gates, now of Westbury, was also in fine form winning the M65 3000m by more than a minute in a fantastic 10:26.83.