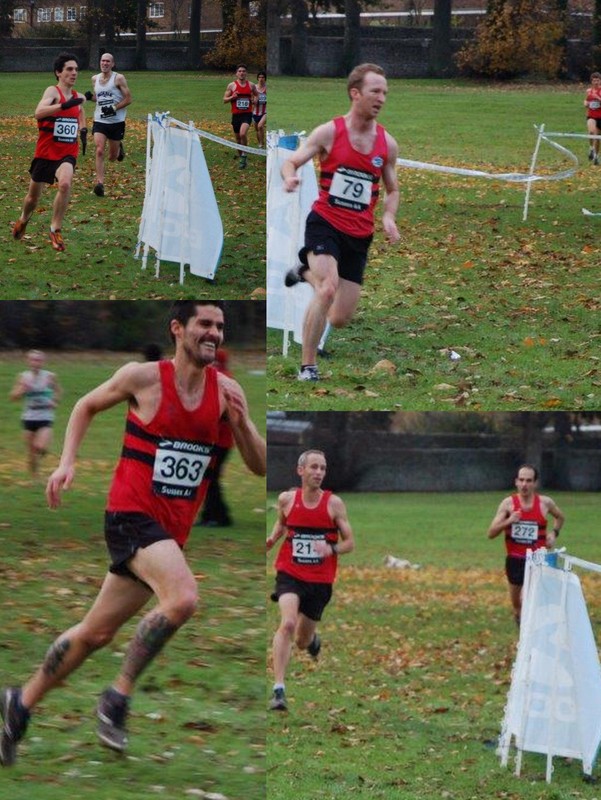 The senior men’s team have had an excellent start to the cross-country season, with the A and B Teams currently residing top of division 1 and division 2 respectively.  The Vets team are  in fourth position in their league, a mere eight points adrift of second place.

Goodwood League Match – Narrow loss at Goodwood
In the first league match at Goodwood, there were a few key runners absent, coupled with an unusually strong Worthing team who took the honours by just eight points from Brighton. Howard Bristow led the team home in fifth place with Dimos Evangelidis not far behind in sixth. Ian Crowe-Wright continued his dominance at U20 level finishing first in the age category and seventh overall despite a rather lonely second lap! Matt Bristow showed his experience with a well-paced 11th place, just overhauling Ashley Witcomb in the final half lap who finished 13th place, with Charlie Noakes making the scoring six in 30th position.  The B team finished second in the match and there were some fine performances throughout the whole men’s team.
Plumpton League Match – Seven score in the top ten!
The second league match at Plumpton really demonstrated the strength of the team with Brighton filling seven of the top ten places!  Kev Rojas made a bold bid for a first ever cross-country victory, but eventually had to settle for second place behind Kev Mason of Worthing. Closing strongly in the final lap, Dimos Evangelidis ran what was arguably his best cross-country race since coming to the UK to finish third, whilst Howard Bristow ran a lonely but solid race to finish sixth.  The deluge of red and black continued with Ian Crowe-Wright (first U20) just beating Andy Donno in the battle for seventh and eighth place, with Matt Bristow hot on their heels in ninth. Thanks to Matt for turning up just over 24 hours after the birth of his second son.
Ashley Witcomb was next home and such was the strength of the team performance here, it left him a little disappointed to finish 10th and still not to be in the scoring six for the A team. Next home in 16th was second Vet David Benton who has made a welcome return from injury. New team members Graham Godden (fifth Vet) and Ashley Humphreys completed the B team.
The result returns Brighton to the top of Division 1 with a 200 point cushion, with the B team now also leading division 2.  A strong performance from the Vets team also moved them up to fourth in their division from  sixth place.
Lancing League Match – Ian remains U20 champion as “A” team lead by a massive 360 points.
Lancing was the next destination for the third match in the league.  The A team romped to victory with the scoring six all inside the top 12 positions, and 11 of the top 20 runners coming from B+H – a truly dominant club performance. Indeed the B+H “B” team would have finished second overall behind the “A” team, had they been competing in Division 1 – an incredible result when you think about it!
Individually, Kev R made another brave attempt to defeat this year’s league leader, Kev Mason, but couldn’t quite bridge the four second gap that opened up in the last quarter of the race.  Dimos and Howard both ran strong races to take fourth and fifth places respectively, with Dimos outsprinting Howard to beat him by a mere second.  Andy Donno took seventh place at just ahead of top U20 Champion Ian Crowe-Wright.  Louis Taub made no mistake in ensuring he was sixth scorer for the A team in 12th place, after an exciting last lap battle with Phil Caine who eventually finished 14th and was first scorer for the B Team.
Tim Lunnon finished an encouraging 17th, just two spots behind soon-to-depart Spaniard, Carlos Prieto in his third league match for the club.  Zared Hale completed the B team in 18th position, with consolidate the team position at the top of the B Division by 238 points.
The vet’s team also had a great performance and now are only eight points adrift of second place with Graham Godden in 31st supported by John Lowden and club newcomer Morris Tarragano in 38th and 40th respectively.
The performance of the team this year has so far been fantastic. The number of athletes competing for the club in the cross country leagues has increased, as has the strength of the team.  After three matches last year the A Team led the division with 374 points, with the B team residing fifth in division 2 on 1076 and the vet’s team lying in 10th position in their league.  After the match at Lancing we are leading the A and B divisions with 145 and 301 points respectively, and the Vets are fourth in their division.  A big thanks goes out to all the athletes who have turned out so far this year.  It’s a long wait now until the final league match at Bexhill in March where we will want another strong showing to consolidate the positions.