In her last competition of the season, Brighton and Hove athlete Dulcie Yelling has broken three records with one exceedingly long javelin throw of 44.80m.

Competing at Portsmouth, Yelling improved her personal best by nearly three metres, setting not only a County and club record but recording the longest throw ever of the 500g javelin by a British female athlete aged 13.

Yelling last year broke the British under 13 record when she threw 44.02m with the lighter implement. Her achievement elevates her to fifth place on the u15 UK All-Time javelin rankings and second in her age group in 2020, and she still has another year to go.

Dulcie is an extraordinarily versatile athlete and holds Sussex under 13 titles in the combined events, cross-country and 1500m.  She is one of three talented athletics siblings, who in March all represented Sussex at the English Schools’ cross-country Championships. 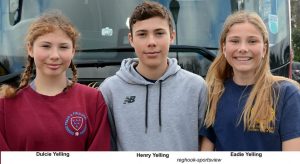