Some excellent results for B&H City AC Women
U17 Women
This was a really exciting race in which both Esther Lutz-Davies and Martha Coyle were in the leading pack from early on, backed up very well by Phoebe Connolly.  As the race progressed the lead pack thinned and gaps began to appear with Martha looking good for silver and Esther now just outside the medals.

Martha was closing on the leader as they entered to woods for the final time but it seemed that Rose Ellis had kept enough in reserve to hold Martha off, as she still held a lead of 15m or so in the final long straight.  However, Martha had other ideas as to the destiny of the individual gold as she put in a mighty kick that not only saw her catch and pass Rose, but then open up a winning margin of 7 seconds, to record 21:23.  Esther continued her fine form this season with a fine 5th place in 22:48 and Phoebe finished strongly in 14th place in 25:07.  This meant that the girls won team silver, just 2 points adrift of winners Chichester along with Martha’s individual gold, a great result for the girls.

U20 Women
This race was held in conjunction with the senior ladies race and although there was no team event, there were individual honours at stake, and so I’m delighted to say that we came away with silver and bronze for Rachel Titheradge and Summer Ibrahim, both of them only being beaten by the outstanding Grace Baker from Hastings who won the senior race outright!!  Rachel set off with her characteristic strong start and only began to slowly lose touch with the leading pack of senior ladies after a mile or so, after which the mud and hills took effect and she slipped back a few places.  To her credit however, Rachel stuck to the task and held on strongly for her U20 silver and to, in fact be the first B&H City AC finisher in the race with a time of 29:27 and placed 13th in the race overall!!  The conditions were even more of a challenge for Summer as she has lived in Lanzarote for quite a few years and rarely sees grass, let alone has to race on deep, wet mud!  However, she showed her class as despite the hostile conditions for her she too had a great run for 16th overall, 3rd U20 in 29:49, which made her our 2nd B&H city AC finisher. 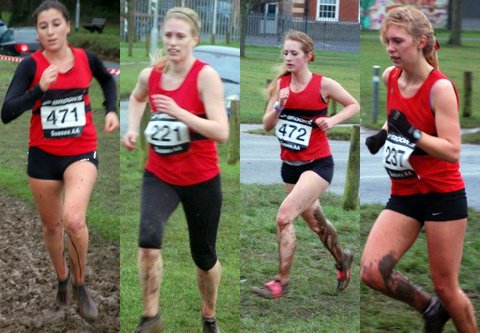 Senior Women
I have already mentioned Rachel and Summer, who were our first two finishers in the Senior Ladies race so our 3rd finisher was the ever dependable Laura Douse, who was chasing Summer down for much of the latter part of the race and closed to within five seconds of her by the end to place 17th in 29:54.  Laura was backed up by Nicola Silsby 35th in 33:33, Camilla Moyle 37th in 33:49, Elaine Everill 39th in 34:09, Laura Lambourne 45th in 35:41 and Marian De Silver 59th in 40:34. Nicola finished very strongly to pass Camilla in the later stages and this determination was rewarded as she was our 4th counter in a team that finished in 3rd place and thus took team bronze, so very well done all of you.