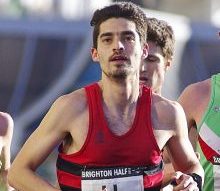 Brighton’s Kevin Rojas has been called up to represent Great Britain for the first time.

Rojas is one of 10 athletes to have been selected by British Athletics to compete at the IAU 50km World Championships in Brasov, Romania later this year.

The Championships, which take place on 1st September, will be the first edition of the event since 2016, when Great Britain & Northern Ireland won women’s team gold and men’s team silver.