Brighton and Hove AC athlete Julia Machin has added two centimetres to her W50 High Jump World Record with a leap of 1.68m at Bedford. Julia a former British record holder and national champion, with a best of 1.92m, was jumping at the Big Jumps and Throws Festival on Bank Holiday Monday.

At the same meet her Lizzie Korczak, broke her own under 20 Sussex javelin record by almost half a metre, with a fantastic throw of 49.12m.

Surely the magical mark of 50 metres is a possibility this season? 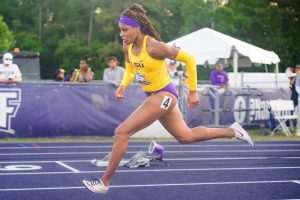 Meanwhile in Florida Amber Anning broke her own Sussex Women’s 400m record. Running for Louisiana State University in the Quarterfinals of the NCAA East championships Amber finished third in Jacksonville in a county record time of 51.78s. This gives her automatic qualifying to the NCAA finals, the week after next at Eugene, Oregon.

Amber, also ran the second leg in the 4×4 LSU relay team which also qualified for Eugene with a season’s best of 3:28.84.

After Eugene Amber will be heading home for the British Championships at Manchester from 25th – 27th June, which incorporates the Olympic trials. She is currently the fourth fastest British 400 metres runner, but only Jodie Williams has achieved the Olympic qualifying standard of 51.35s this year.