National 300m Title plus a Triple Jump silver for Anning 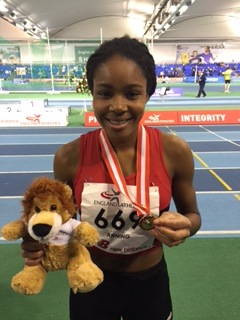 Congratulations to Amber Anning who, in her first year as an Under 17, won gold at the National Indoor Championships at Sheffield over 300m and next day took the silver medal in the Triple Jump competiton. Anning went into the nationals as a favourite as she is the only U17 to have run under 40 seconds indoors this year and she had won the outdoor U17 title last August – when still a U15. In the third heat she ran 39.97 to go into the final as the fastest qualifier. The final was later that afternoon. After a contained start Amber moved up a gear with 100m to go, to win effortlessly in a time of 39.37, almost a second ahead of the second placed athlete Natasha Harrison from Stockport.

Amber returned to the England Institute of Sport on the Sunday keen for a podium place in the Triple Jump. There she renewed her rivalry with Adelaide Omitowoju from Cambridge, the UK U17 rankings leader, who had had beaten Amber for gold at the Southerns in January. It was the same result with Adelaide jumping a fine personal best of 11.86m for gold and Amber taking silver with 11.55. A great weekend’s work.