Results from the final Cross Country League at Bexhill

The fourth and final Cross Country League race at Bexhill on Saturday 12th February, saw a great turnout of athletes for the Club and some excellent results. This was the concluding match for the League and so the stakes were high!

Despite half term and illness our Brighton youngsters came away with an amazing 34 medals and to add to fine and memorable season, the Senior women and men also came away with League titles.
Julieana who was unbeaten in the League won the individual u/13 League title.
In the u/13 Boys we had a 1, 2, 3 with Raphael 5 points 2 wins, taking the title from George 5 points 1 win and Saul 6 points came 3rd which I believe is a Sussex and club record.
In the u/15 Girls Dulcie was joint second to win a silver medal.
In the u/15 Boys Jude took the silver and Finlay the bronze medals.
The first medals of the day came in the u/11 Girls where Seren back from covid came 8th however having scored only 6 points in the first 3 meetings came away with an excellent silver medal. Just behind Gracie came 9th with Alex 20th Seren G 25th and Mia came 26th.
In the u/11 Boys race Elliott came 3rd and like Seren he came away the silver medal with the League title going to Taylor. Not far behind Joaquin came 4th and Eli was 14th.
In the u/13 Girls it was Lara leading the team home in 7th just in front of Juliana in 8th and Kira came 13th with Elodie just missing the scoring 3 in 14th and good back up came from Sophia 16th, Evie 19th,  Naomi 23rd and Mia 29th and on the day the team came 3rd and were the 3rd team in the League with our B team outside the medals in 4th.
The team of the season were the 13/Boys after their excellent 2nd place in the Southern championships, Raphael won in convincing style and with Saul 3rd and Sammy 5th the team easily won on the day and were the League title winners. Well done to Oliver in 7th Alex 15th and Matthew 24th the B team took the bronze medals. Well done also to George and Alex with Raphael and Saul won team gold and to Louis and Sam who scored in previous meetings won the bronze medals so 9 different medal winners.
In the u/15 Girls race Rosie led the team home in 6th and with Xanthe 11th and Marnie 16th the team finished 4th on the day, however they maintained their 2nd place in the League to collect the silver medals. Well done to Leily in 17th and to Mae 21st the B team were 7th on the day and were the 1st B team in the League. Well done also to Dulcie and Eleni who also scored in previous meetings.
In the u/15 Boys race it was Finlay in 2nd Rowan 7th scoring for the 1st time and Tom B in 8th the team again easily won on the day and like the u/13 Boys team won the League title. The B team of Rory 16th Freddie M 22nd Freddie-Ray 24th and Reuben 38th were again the 1st B team in the League. Well done also to Freddie M who scored in the 1st meeting at Goodwood.
In the u/17 Women race Eadie had an excellent run coming 5th in senior race (3rd u/17) and was part of the senior women’s team that won the title. Well done also to Allanah 14th and to Sima making a welcome return to competition in 15th. On the day they came 3rd and after a count back they were 4th just 4 points behind the 3rd team.
In the u/17 Mens race Kit came 16th and Reuben 17th and on the day came 6th and overall although joint 5th were just 9 points behind the 3rd team. 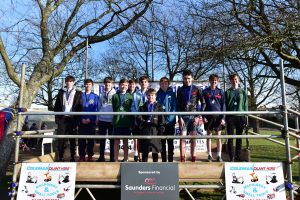 U15 Boys (pictured with medals)

In the Senior Women’s race a convincing win by the team on the day, saw us snatch the title from Crawley. With Lydia Growns taking the League Senior gold medal and Emily Muzio the U20 gold.

The Veteran women were fourth place on the day, but overall League bronze medal winners.

The Senior men were second place on the day, but runaway League winners. With William Cork winning all four league matches to take League gold, with James Turner taking the bronze.

The Veteran men took the league gold medal, with individual gold and silver for Craig Halsey and Howard Bristow respectively.

See the report from Kate Matthews on the Sussex AA website.