Medal haul for B&H athletes at the Southern Vets Champs

On Saturday a trio of Brighton & Hove AC athletes made the long journey from the coast to Abingdon for the Southern Counties Veterans AC Track & Field Championships.

New W45 category entrant Jo Wilding set the tempo for the day in the 400mH, with a close run against her main competitor. There was nothing in it until Jo opened up a gap at the half way point. Despite being closed down in the last 50 metres the victory was hers in a time of 76.15.

Further wins in the 80m hurdles in a PB of 14.09s and another gold in the the High Jump (1.37m) will hopefully set her up nicely for the British Masters Outdoor Pentathlon Championships next weekend. Unfortunately she will have to make the long trip  to Oxfordshire again to Horspath.

W50 Tracey Brockbank was equally busy winning the Hammer in a PB of 27.10m and the Javelin  with a throw of 18.22m. She was also runner up in the 80m Hurdles and 100 metres. Altogether it was an exhausting but satisfying day for both women. 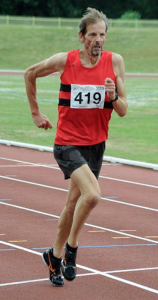 Meanwhile, new M70 entrant David Spencer, on the comeback trail after a grade 2 hamstring tear earlier in the year, won the 400 metres in 68.14 to take him to the top of the UK Rankings in his age group.