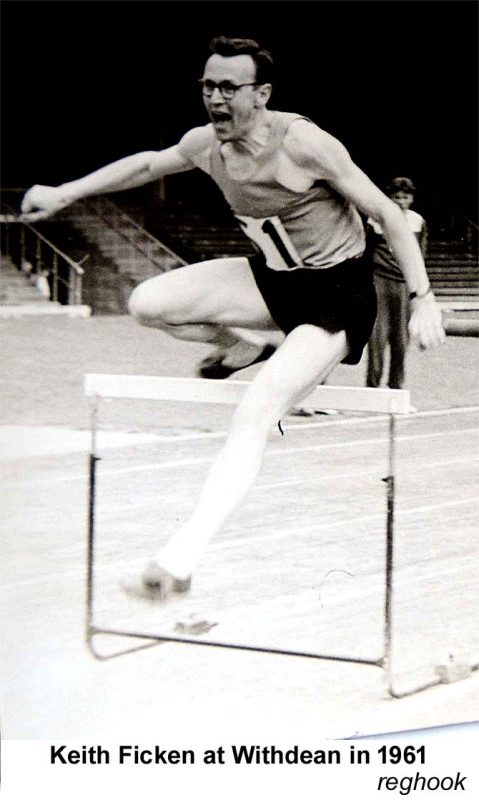 We are saddened to learn of the death of Keith Ficken at the age of 89. Keith joined Brighton & County Harriers in 1949 and probably only Hugh Foord and Reg Hook have belonged to the club for longer.

Keith was primarily a hurdler, though when he reached the Veterans stage he competed frequently in Multi events. He was a one time Sussex 440y hurdles champion and he was the second-ranked Sussex runner in the event when the first issue of Sussex Athletics Review was published in 1960.

Keith was a teacher. During much of the 1960s, his work took him away from the area, but when he returned he was an active competitor in Masters events travelling all over the country.

For several years, around the turn of the century, Keith coached many of the Brighton youngsters in the high jump at Withdean before starting on his own training. He was also a club and County office, but not on Sundays.

“I remember Keith, (or Mr Ficken, as we called him then), coaching us as kids when we used to have rotations around all the different events on club nights, so that we got to try out everything. I think it was part of the reason so many of us did multi-events”.

“I didn’t know him when I joined Brighton AC in 1962 but his was the first face I met when rejoining the club as a Veteran some 33 years ago now, as he signed in both myself and my 12-year-old son, promptly telling him to stand up straight and take his hands out of his pockets, in his school mastery way.

“A few years later he’d often drive me over to Eastbourne and Hastings to compete in the Sussex Veterans League meetings and he was always a good and intelligent conversationist. On more recent occasions I would natter to him while he was valiantly attempting 1m+ high jumps, encouraging him to continue competing and letting him know what the Power of 10 guys in his age group were achieving. Keith was a super guy who will be sadly missed”.

In 2001 the Argus wrote a feature about Keith. Read it here.

A thanksgiving service for Keith’s life will be held at the Bishop Hannington Church, Hove on Thursday 19th August at 14:30. Everyone who knew Keith is welcome.