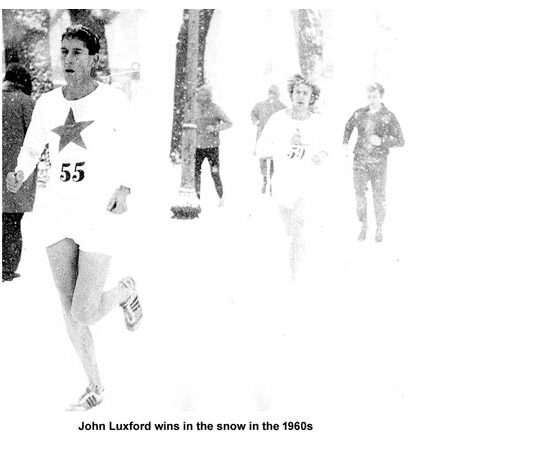 The Brighton and Hove AC “Boxing Day Races” are back for the first time since before the pandemic. Join us to celebrate the 90th anniversary of our iconic ‘run or race walk off your mince pies’ event!

Below, our longstanding club member Roy Taylor shares his memories of our club’s annual sporting event. But before you read it, we do need volunteers on the day. Can you spare an hour or two any time from 10 am-12 midday? If so, please contact Paula Blackledge for info on how you can help.

It is great to hear that the Brighton Boxing Day events spring back into action this year after being seriously disrupted, mainly by Covid, over the last four years. I have learned a bit recently concerning the start dates for these long-standing events. I was aware that they were started by Brighton Labour Club in 1932, this year being the 90th anniversary, but obviously, there was a gap through the war years and during recent happenings. I was unaware that the running events did not start at the same time as the walking; I had no idea that Brighton Athletic Club added them 20 years later, in 1952. 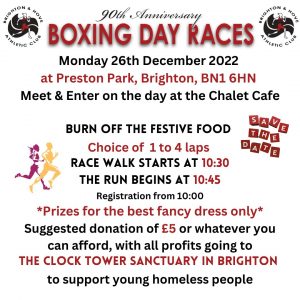 This was just four years before my first appearance in 1956, having been posted to Shoreham as a 19-year-old RAF National Service Radar Operator at the Truleigh Hill radar station just three months earlier.

In my early days of participation, the runs and walks always started from outside the Labour Club on London Road and were spread right across the road at the start. Following a quick turn into Baker Street, the course proceeded across the top of the level and left into Lewes Road. After passing Cox’s Pill Factory and the Gaiety Cinema, the next landmark was Preston Barracks before carrying on through the western edge of Moulsecoomb to reach the turning point at Stanmer Park gates. There was no sign of any university buildings on those early1950s runs.

It is difficult to believe what happened next, as my early memories report that we rounded a marshal standing in the middle of the A27 before heading back to town on the other side of the road. On reaching what is now a busy Elm Grove junction, we crossed without difficulty to head for the finish at the end of Baker Street. It was then off to the Labour club for refreshments, and presentations.1950s photos show a probable field of 30 runners and a similar number of walkers.

The running numbers increased considerably to 150 at my last Boxing Day run in 1996 and will most likely be well over 200 this year. Unfortunately, race walking has gone in the opposite direction and events in Sussex and many other parts have difficulty reaching double figures. However, the walkers had a current Olympic champion as the head of affairs in 1957.

The course of the races in relation to rising traffic levels could not continue, and in the 1970s, the venue was
moved to Preston Park and has been there ever since. It is a super event which I always looked forward to, but regrettably, consistently recurring injuries restricted my appearances to 20 over a 40-year period.

Final note: Every year, Reg Hook has taken excellent photos of this and many other events. A close look at the photo of the 1957 start (featured above) will reveal Reg’s dad lining up close to the rear of the field. Also, note the trolley bus lines.