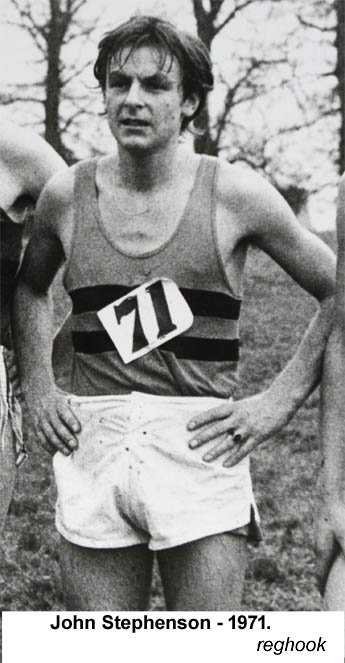 We are saddened to learn of the death of our former athlete John Stephenson, writes Reg Hook. John, who lived in Chichester, was 73. He was out for an off-road bike ride near his home at Selsey and was discovered by a rambler, who was a doctor and declared him dead at the scene.

In the 1960 and 70s, John was one of the leading Sussex cross country and middle-distance runners. In the younger age groups, with the likes of Bill Mullett, John Hazelden, Dave Welch, Peter Standing and Peter Witcomb he was part of the Brighton & Hove young athletes teams who won team medals in the Southern and National cross-country championships including a fifth place in the National Youths championships and winning the Southern Junior title in 1967.

In 1966 John won a silver medal in the A.A.A  2000m Steeplechase championship. He made several appearances in Sussex and Sussex Schools cross-country teams, right through to the senior age group. and was also a formidable steeplechaser. In1969 he clocked 9:04.8s for the 3000m Steeplechase, which, at the time was the third-fastest time ever by a Sussex athlete and it stayed in the Sussex Top ten All-time performances until 1999.

John was an oft-times member of the successful Brighton & Hove Cross country team and was in the historic squad that became the first Sussex club to win the South of Thames Senior Cross-country team title.

In 1980 John moved to Selsey and ran a successful roofing company. He joined the Chichester Club and continued road and cross-country running through to making several appearances in Sussex Master’s championships.

He had an elder sister, Valerie, who had run in the first 880 yards Girls race in the English Schools Championships and finished fourth.