Honours for Amber and Jamie at Sussex Sports Awards 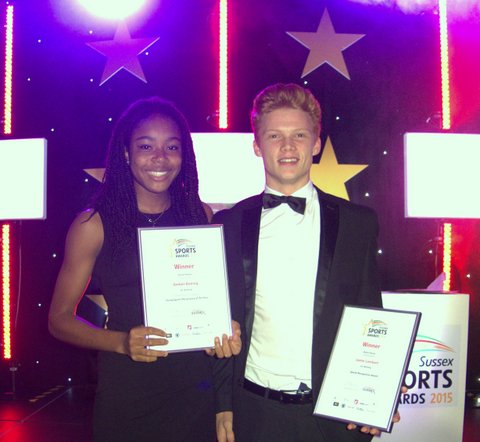 After recent damning headlines it was wonderful to see athletics celebrated at the annual Sussex Sports Awards, which took place at the Grand Hotel in Brighton on Friday. The evening, hosted by Olympian and 2010 Commonwealth Games Heptathlon Champion Louise Hazel was a celebration of sporting achievement throughout the county across the year.

Two of our younger athletes were recognised with awards. Amber Anning won the Chichester University “Young Sports Personality of the Year 2015” for a season which she ended as the Youth world lead over 300m after setting a European and UK Under 15 record of 38.73 seconds when winning the National Under 17 title at Bedford. Anning, is also the UK Age 14 record holder in Triple Jump and ended the season top of the National rankings over 200m, 300m and Triple Jump as well as ranking fourth and fifth in Long Jump and Pentathlon respectively.

Meanwhile hurdler Jamie Lambert, received a “Special Recognition” award. Jamie raised over £3000 for disabled athletes involved in the Parallel Youth Games 2015 by taking part in an expedition to Southern Greenland. The talented athlete was inspired after suffering a hip injury last year which left him unable to train for six months.