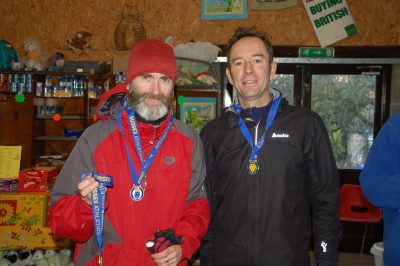 Our veteran runners had a fantastic outing at the tough, hilly Coombes Farm cross country circuit on Saturday, coming away with no less the team Gold in the men’s V50-59 event, four individual silver medals and two more team bronze medals in the ladies V35-44 and V45-54 categories at the Sussex Masters.

The day started with the Men’s combined V50 and V60 upwards age groups and here we saw Graham Godden set off strongly to lead the field through the first lap, only to be gradually pegged back on lap 2 by David Powell from Phoenix. Graham ultimately coming home in second place, just 18 seconds adrift of gold. Backing Graham up we had Keith Newton in 12th and an outstanding run from Sean Gibson to place 20th, surpassing all expectations. These positions being sufficient to give us an eight point winning margin over second placed Horsham Joggers. An excellent result given late call offs to the team.

Within this same race we regretfully had to relinquish our V60 team crown after having won the event the last two years, injuries this year meant we couldn’t field a team, but ever youthful John Lowden ran strongly for individual silver, chasing eventual winner Alan Buckle from Wadhurst the whole way round and only coming up short by eight seconds at the finish. Also running in the V50 field was Andy Mitchelson who placed 33rd V50 in 35:52 so not making our scoring 3 but great to have him as key support to the team. Interestingly that time, if we’d been able to run Andy in the V40 race would have placed him 41st V40, which in turn would have allowed our incomplete V40 team to place third!

Next up were the ladies where all age groups ran together making an impressive field of 81 finishers and I’m delighted to say that we won medals in all the age groups. Our V35 ladies won bronze with Freya Leman 5th, Charlotte Laing 14th and Gail Nerurkar 18th, Gail in particular should be singled out as she will be 55 in a few months and stepped down to the V35s to enable a complete team, so without her no medal would have been possible and what a run she had!

In the V45 to 54 ladies race we matched our younger ladies with a team bronze, in this case the team being Paula Blackledge ninth, Camilla Bishop 10th and Jeanette Kenneally 14th

Unfortunately, despite my best efforts I wasn’t able to get a third V55 upwards lady to support Cathy Ulliott and Judith Carder in this final age group, but Cathy had an excellent run to place second in her age group with Judith 12th.

Finally, the ‘young men’ toed the line for the V40-49 age group race and here we saw a near repeat of the v50 race where B&H AC athlete Craig Halsey matched Graham Godden’s efforts by leading until the steep hill on lap 2, to be overhauled at the top but held second place comfortably at the finish.

Similar to our V60 team though the excellent efforts of Craig, supported by terrific runs from Thomas Ireland in eighth and Louis Taub 14th were in vain in the team race, as we needed a fourth runner to score and didn’t have one on the day. The deadline for advising the race organisers of anyone dropping an age group to fill gaps in incomplete teams being midday Thursday, so insufficient time for us to say add a V50 or even V60 to the V40s team, but never mind, a fabulous and successful day for the club and well done to everyone who took part.