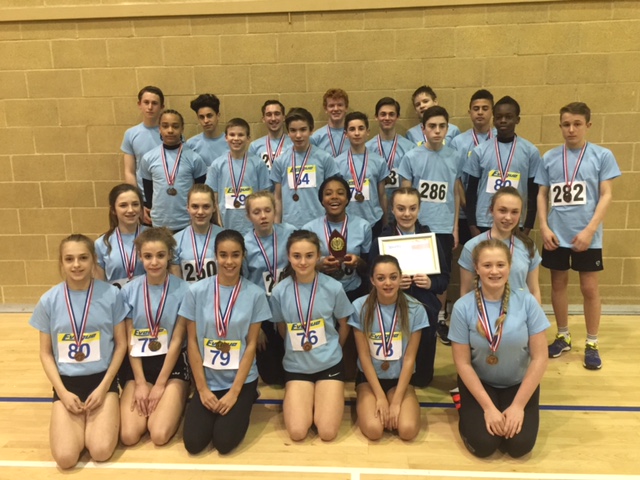 Brighton & Hove athletes excelled at the Regional Sportshall Final helping Sussex to its best ever team results. The Under 15 Girls team won silver, both the Under 13 Boys and Girls teams took home bronze medals and the Under 15 Boys came fourth. Individually there were many outstanding performances and podium places.

In the U15 girls All-Rounder competition 47 athletes had to compete in three events (a run, a jump and a throw/speed bounce).Last year Amber Anning came third. This year she dominated, winning the Vertical Jump with 67cms and the 4-lap sprint and coming second in the Shot with 10.60cms. Amber scored 148 out of a possible 150 points and won another gold medal alongside Ella Sharpe (HBS) in the 8-lap Parlauf where they beat the opposition by some four seconds. Amber has now qualified for the UK Sportshall final in Manchester in April.

Anna Dornbusch was sixth in the 4-lap and 7th in both the Speed Bounce and Standing Long Jump finishing in thirteenth – a great result in her first year in the age group.

For the U15 Boys, Asier Barnett and Sam Wilkinson won bronze medals as part of the 4×2 relay team.Meanwhile, Joshua Firsht took the bronze medal in the 4-lap time trials. He was just ahead of Max Brazier who had won his heat but finished fourth overall. Max and Joshua later teamed up for the 8-lap Parlauf and destroyed the opposition to take gold. It was a great weekend for Max who had been in Nottingham the day before competing at the English Schools’ Cross Country Championships in the silver medal, winning, Junior Boys team.

In the U13 girls competition Roxy Jones was 8th in the 6-lap Race and fifth in the Speed Bounce with 82.For the U13 boys Joshua Hartnett won a silver medal in the 4X2 relay and was fourth in the 2-lap sprint and fifth in the Standing Triple Jump with 6.78m.Adam Firsht was bronze medallist in the 6-lap and a gold medallist alongside Worthing’s Tom Ridley, in the 8-lap Parlauf.