Glorious finale to the cross country season for the club! 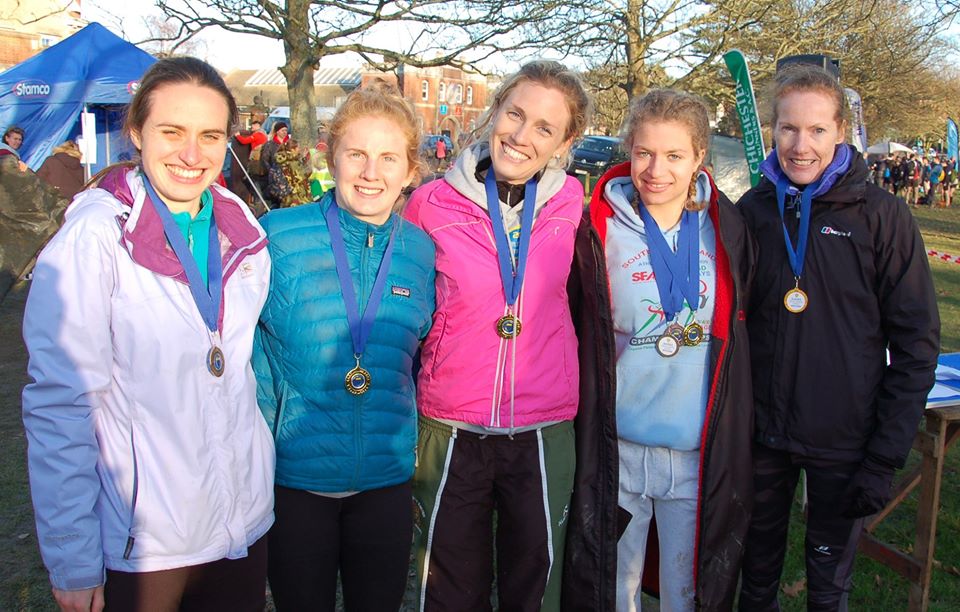 Saturday 8th Feb saw the 4th and final fixture of the 2019/20 cross country league in Sussex, and what a day it turned out to be for the club with medals galore in a lot of the age groups. Several individual medals will also be awarded to our athletes but we will have to report on this later as they are still being worked out.

The day started with the U11 races both of which were won by our athletes. Coming home first for the boys was Raphael Kelly, closely followed by team mate George Gilbert. For the girls Julieana Walsh was first across the line.

In the U15 races, although the girls only finished 3rd on the day they still held onto their lead in the league, beating Eastbourne/Bodyworks by 3 points! For the boys Henry Yelling had another great run to finish third on the day. In the league the boys team finished 3rd.

Also in the medal mix were our u17 ladies, this time bringing home not one but two team medals with our A team finishing 2nd in their league and our B team 3rd. The U17 men finished 4th in their league.

The senior ladies, we were in a reasonable, but not totally safe position going into the match with just 32 and 49 points between us and 2nd & 3rd placed Arena and Phoenix respectively. However, our ladies had a storming run to smash the opposition and finish first team on the day by a massive 31 points ahead of Arena, thereby guaranteeing the team league title by a huge margin of 63 points over the 4 matches.

Further good news was that our ladies B team finished runners up in Division 2, thereby ensuring promotion to the top tier for next season, and a return to the club having two teams in division one.

Our lady vets team continued with the medal haul with overall team silver in their league but actually finishing ahead of gold medal winning team Arena on the day.

The good news rolled on to the final race of the day the senior men’s, which was won in style by William Cork, followed by team mate James Turner. Ensuring Brighton and Hove AC a win for the match, and securing the league title (which wasn’t really in doubt) by an astounding 387 points, ahead of second place Phoenix.

Going into the race our vet men had a very narrow lead ahead of 2nd and 3rd with just 10 points between all 3!! Add to this the fact that we had several missing due to injury and not just our lead was at risk but even 2nd place was going to be a challenge. The vet men were having none of it though as they rallied superbly to actually win the race on the day as well as ensuring gold for the team in the league.

Well done everyone, you’ve done yourselves and the club proud!!