Glorious day at Goodwood for Return of Cross Country League 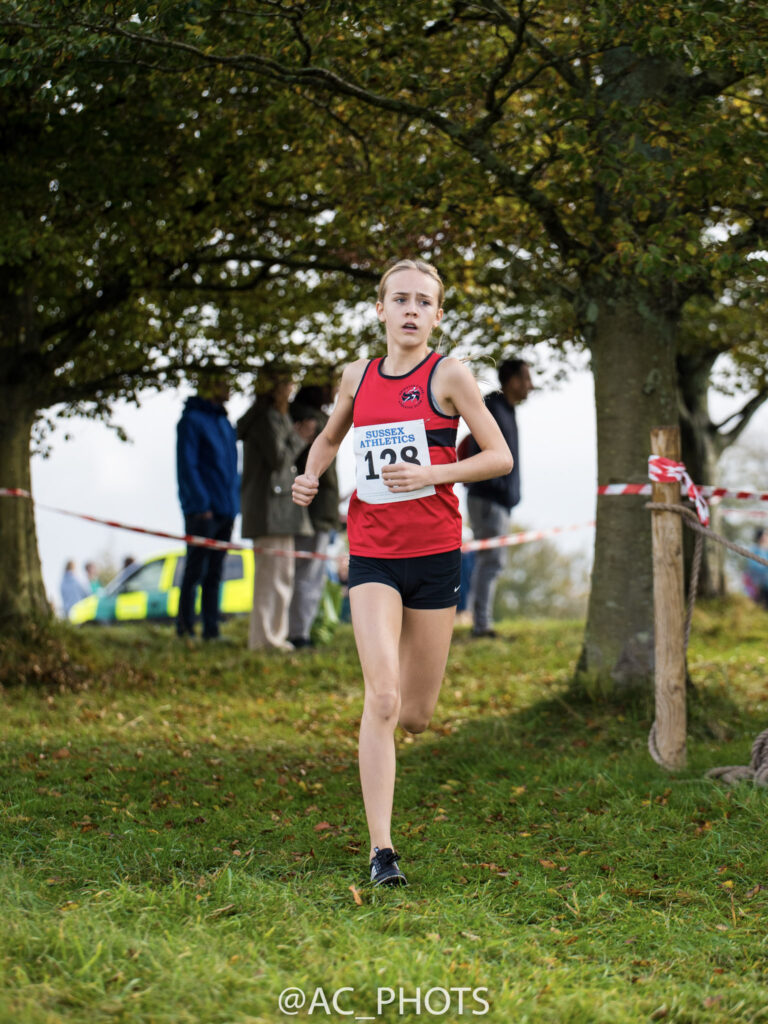 An air of euphoria fell across Goodwood as the first Sussex Cross Country League races got underway on Saturday.

Due to Covid, it had been over 18 months since the last league fixture and there were concerns that enthusiasm may have dampened during this time.

This proved not to be the case as more than 500 athletes turned out to compete.

The day kicked off with the Under 11 races where Brighton and Hove AC youngsters romped home in both the girls and boys 2k races – Seren Rowe and Elliot Marini being the winners.

Brighton and Hove then continued to enjoy success in the Under 13 age group. Team-mates Saul Bennett and George Gilbert stuck closely together at the front for most of the 3k race and it was only a sprint finish at the end that split them with Gilbert crossing the line first. With fellow Brighton runner, Alex Roberts in 8th, the team scored an impressive 11

points to win on the day. The Chichester team, led by Stanley Wilkes in 3rd, took the 2nd team spot with 23 points.

In the girls’ race, Julieana Walsh, Brighton and Hove AC, finished 16 seconds ahead of Eastbourne’s Freda Pearce who

was 12 seconds in front of Jennifer Klein (Crawley). With a combined total of 16 points, the Crawley team were top on the day with the Brighton team scoring 18.

As the day progressed the temperature rose and at times felt like a summer’s day.

In both the Under 15 races, there was no doubt about the individual winners. Grace Tuesday (Lewes) comfortably won and helped her club to number 1 in the teams. Katie Foss (Crawley) was 2nd and Ela Pemberton (Chichester) 3rd. Brighton and Hove were the 2nd on team points and Crawley 3rd.

There were 31 athletes in the Under 17 men’s race where Miles Waterworth (Brighton Phoenix) came through the line 1st followed by Chichester’s Harvey McGuiness and Luke Newton (Crawley).

The Under 17 women ran in the same race as the U20 and seniors, and it was an Under 17 who was victorious. Yasmin Kashdan (Crawley) looked phenomenal and was over a minute faster than the athlete in 2nd spot, Under 20 Alice Cox (Brighton Phoenix). Lewes AC’s Megan Taylor was the 1st senior over the line in 5th and Sharon Gordon (Crawley) the 1st V35 in 7th overall.

A minute’s silence was held at the start of the women’s race in memory of Crawley and Arena’s Fiona Clark, who sadly passed away.

Joshua Hobbs (East Grinstead) was the 1st U20 (4th overall) and Howard Bristow (Brighton and Hove) was the 1st V40 in 8th overall.

The senior team results were not available at the time of print.

A huge thank you Phil Baker and his Chichester AC team for staging such a well-organised event. It was brilliant to see cross country back. The next fixture will take place at Stanmer Park, Brighton, on Saturday, November 13.