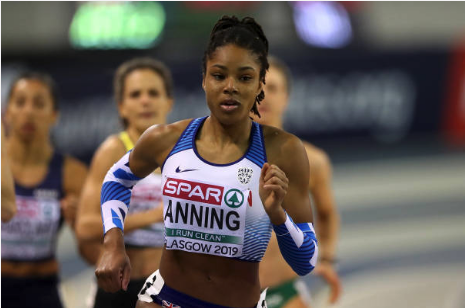 Congratulations to Brighton & Hove AC athlete Amber Anning, who has been selected for the British Athletics Futures Academy programme. Futures aims to confirm an athlete’s potential to transition onto the World Class Programme (WCP) in the next cycle and support those who have highlighted the potential to win medals at future Olympic and Paralympic Games.

Amber, who has been a member of the club since she was nine years old, broke the 49-year-old British indoor Junior 400m record this year, was the youngest member of Team GB at the European Indoor Championships, where she won a silver medal in the relay. In June at Bedford she became national under 20 champion over 400m and secured her seat on the plane to the European Junior Championships in Boras, Sweden, where she ran 52.18s – the fastest time by a British Junior woman since 1982 – en route to an individual silver medal in the one-lap and a gold medal anchoring the 4x400m relay team.

Former Brighton & Hove AC athlete, 110m hurdler Cameron Fillery, from Saltdean, has also been selected for the programme. Loughborough University student Cameron had an amazing season culminating in his bronze medal at the European under 23 Championships and a silver medal at the British Championships.