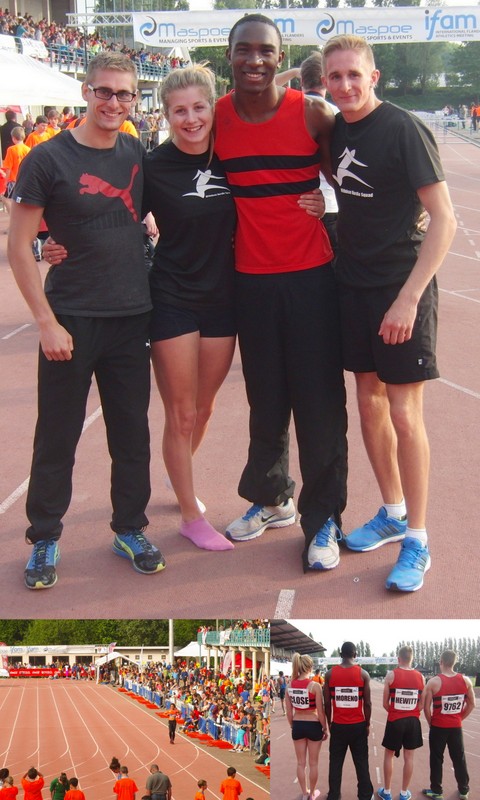 Five athletes represented B&HAC at the International Flanders Athletics meeting (IFAM) in Oodegem, Belgium. This meeting first started in 2009 as an opportunity for athletes to gain qualifying times for the year’s major events – this year it’s the European Seniors, Commonwealth Games and World Juniors. Over the last few years this has also grown to allow other athletes a chance to compete at an event on a mondo track with top level competition.

As a coach I see this event as a key part of an athlete’s development. It allows the athletes a chance to experience a full international event, competing against athletes from all over Europe and as far away as South Africa. The environment it throws them into is a long way from equivalent events in the UK such as the Bedford International Games. Although travel to the event is relatively easy, the round trip being less in terms of miles than competing at Sheffield or Manchester, it does help the athletes become familiar with travelling abroad to seriously compete instead of just for a holiday. This includes factoring in small things like ensuring they have the food they like and need – Belgium being famous for beer, chips and chocolate is fine for coaches but not necessarily for athletes.

The five who made the trip were Beth Close, Chris Hewitt, Matt Hewitt, Peter Moreno and Will Gray. This year all 5 were up against stiff competition, the hurdles races are always of a high standard, this year being no exception with world and Olympic finalists trying for qualifying times. Peter in the long jump pulled out his best performance of the year at 6.84m but was still only 15th – a big difference from the Southern Athletics League.

In the hurdles, Beth was leading until hitting an early hurdle then having to battle against the wind to pull back a time still inside the qualifying time for English Schools. Peter won his heat and the clock showed a pb of 14.78, but sadly this was rounded to 14.81. Matt is still getting used to a 7 stride start and found the 2m/s head wind difficult. He came in third with a close to pb 15.25 Sec.

In the sprints, both Chris and Peter found the heat and wind not in their favour but pulled out times that showed that the hand timing at league meets is spot on they were close to pbs for the 100m and 200m.

One other aspect of this meeting is getting used to competing at odd times – Will had to sit around all day and most of the evening before getting to compete at around 10pm. This clearly did not upset him as he pulled out a top performance to beat his pb by around 3 sec.

The key aspect for the BHAC athletes is that it puts performance into perspective on a European scale – if you really do want to be an elite athlete it shows where you are and gives an indication of what you need to do to get there.

The first year I went I took one athlete, the next three and this year five and in future I hope to take more. The web site with all the results and details is www.ifam.be and I am more than happy to discuss this as an option for anyone next year.

Lastly I would like to thank the club for the support it has given the athletes in the development activity – not all clubs have such an enlightened approach.