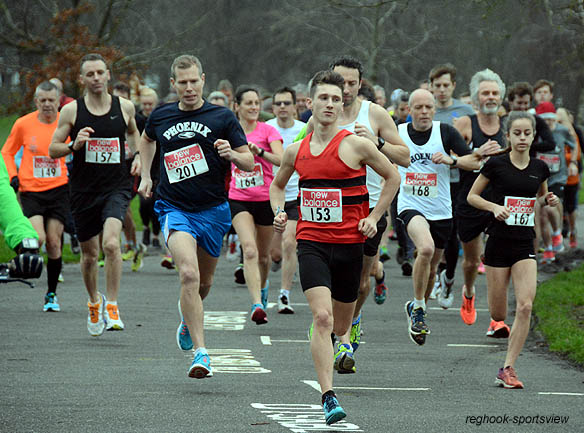 Brighton & Hove AC’s eighteen year old Stephen Ferroni won his fourth title at the Boxing Day races in Preston Park. Ferroni, who became the youngest ever winner in 2012, chalked up the largest ever margin of victory as he romped away from Saturday’s field right from the start chopping more than one minute off his previous best time as he became the first runner to break the 29 minute barrier for more than a decade. Indeed his winning time of 28:28 was the fastest time since the then Southern steeplechase champion Patrick Davoren (PHX) won in 28:08 in 2003. Ferroni finished more than three minutes ahead of Tobias Bremer (PHX) who clocked 32:48 eleven seconds clear of club mate James Miles in third place. Lizzie Durman (PHX) was the first woman to finish clocking 37:43 ahead of Cathy Ulliott (W50) from Brighton & Hove who clocked 38:04 with fellow Brighton runner Jeanette Kenneally, who recorded 40:43, in third place.