Saturday’s team victory by Brighton & Hove in the South of Thames Senior cross country championship is believed to be only the fourth Sussex win since the race was started in 1888.
Teams from Eastbourne, Hastings and the then Brighton & County Harriers were involved from the start and the first victory was in 1902 when the County Harriers took the title with 138 points. 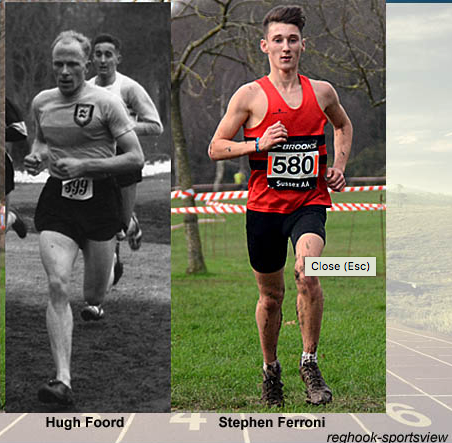 Such was the quality of this race that it was nearly seventy years before there was another victory when Brighton & Hove, in 1971 scored just 77 points.

In 1980 they won again 154 points and then a long gap before they again proved victorious with six man in the first 18 places for just 73 points on Saturday.

The race is open to the South London clubs as well as Hampshire, Kent, and Surrey as well as clubs right down to Bristol.

There are a few gaps in the results so we cannot be completely confident but at least 19 individual titles have been won by Sussex runners starting way back in 1897 when Charles Winterbourne (Brighton & County) took the title and 1899 and 1900 saw club mate A.E.Hutchins take the crown.

In 1908 Eastbourne Rovers R.H.Backshall won the title before a forty year gap.

The races were not held during either World Wars and it was 1948 when Dennis Gander (Horsham Blue Star) won.

In 1955 Hugh Foord for the then Brighton A.C won the first of his five titles, his last win coming 1962, and this broke Joe Cotterill’s 1920s total of four titles.

Cotterill had strong Sussex connections and most of his best running was done when he was stationed at the Royal Corps of Signal’s Barracks at Crowborough. He actually won the Sussex Senior in 1925 when stationed at Crowborough but he was a Surrey athlete.

On Saturday Brighton & Hove’s Stephen Ferroni, having placed second in 2015 won the crown and though the fields are not really as strong as the 1950s and 60s it is still a very challenging race.