Drizzle, Happy Faces and Fantastic Athletics at the Sussex AA U13 and U11 QuadKids Champs 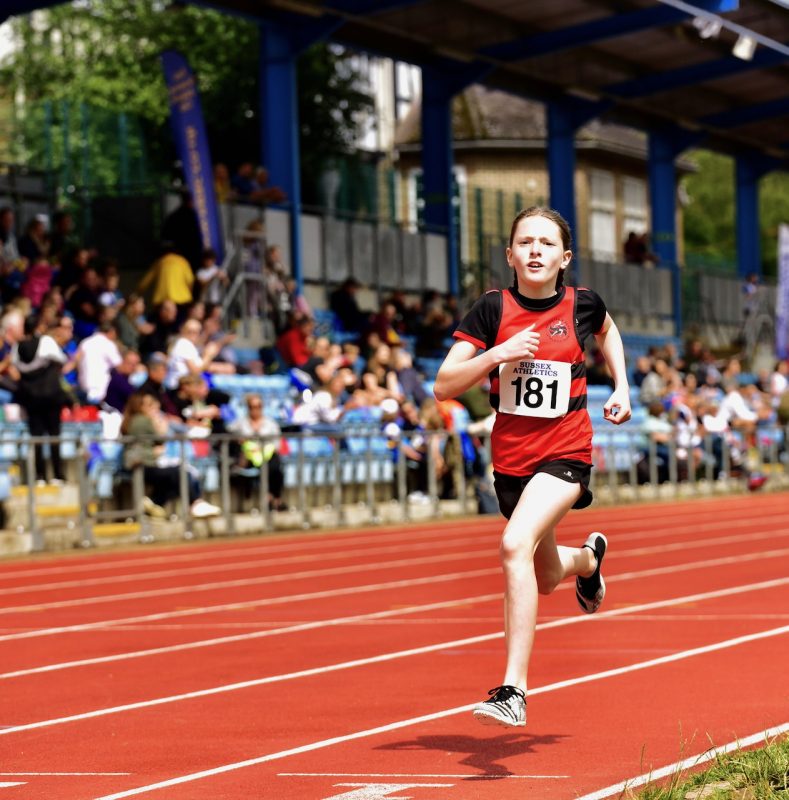 Fantastic under 13 performances and the breaking of a 10 year QuadKids’ record marked the exciting Sussex Champs in Brighton on Saturday.

Following a two year gap since the last Under 13 Track and Field with Under 11 QuadKid Champs, 300 youngsters gathered at the 2021 event at the Withdean Stadium.

The first record to fall was in the Under 13 Girls’ 1500M where up until the last lap with  Julieana Walsh was being pushed by Crawley’s Elsie Whyman. However, in the final 400m Walsh hit another gear storming ahead for the gold clocking an impressive 5:03.31. Whyman took silver in 5:12.08.

As the event progressed, so to did the rain, but this didn’t seem to dampen the spirits of the youngsters taking part. The Under 11 Quad Kids moved from  the 75m sprints to the howler, standing long jump and finally finishing with the 600m –  all the time chatting and soaking up the atmosphere. By the time they had finished the sun was shining.

Prior to Saturday, the girls’ QuadKids record was 238 points and held by our own  Amber Anning. Whilst Anning was at the European Under 23 Champs representing Great Britain, her young club mate Seren Rowe (main photo) was working her way through the Under 11 event in Sussex and through a string of consistent performance across all events, she managed to score 241 points breaking the 10 year record.

In the boys’ event,  Isaac Machin took the title with 240 points. Being in Year 4, Isaac has another year in the age group so it will be exciting to see what he can achieve next year.

The last individual event on the track, before the relays was the Under 13 boys’ 800m. From the gun, Raphael Kelly went out hard and many would have questioned whether he would have the momentum to keep up the pace. He did, and as result clocked a phenomenal CBP of 2:16.41, placing him fifth in the UK.

It was brilliant to see so many young athletes competing, in what for most would have been their first tastes of a championship event. The official and volunteers who turned out on the day were amazing, and huge appreciation goes to them for all their hard work.