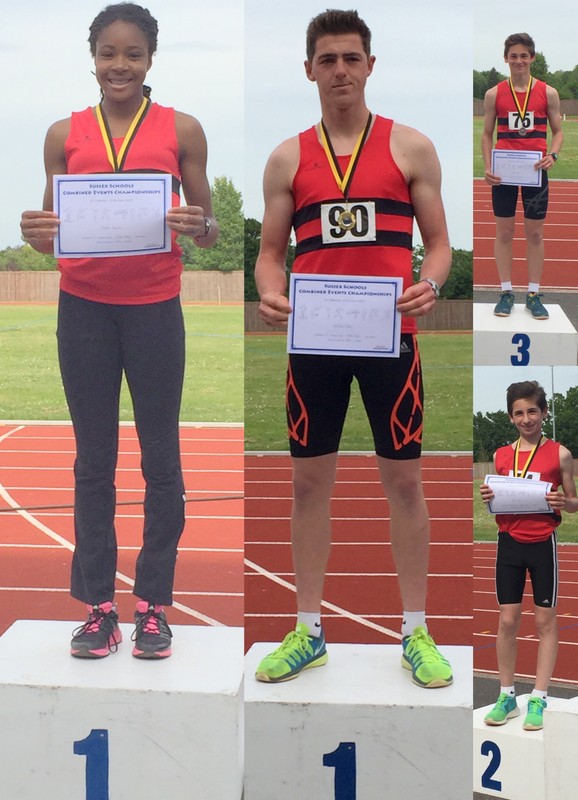 Later in the week Amber Anning (Junior Girl) set a Championship Best Performance at the Sussex Schools’ Combined Events, breaking the aforementioned Miss Garland’s four-year-old record with a score of 2946 points. Anning dominated winning four out of five of the events outright and gaining a national standard with a 12.4 Hurdles, 5.09 Long Jump, 1.51 High Jump, 9.22 Shot Put and 2.35 800m.

Matt Smith’s victory was never in question in the Inter Boys event, which included Javelin rather than shot. He won all five events and just missed out on the long standing CBP. Smith’s final score of 2814 included an English Schools Standard of 6.52 in the Long Jump, alongside his 15.7 hurdles, 1.74 High Jump, 37.56m Javelin and 2.14 800m.

Brothers Joshua and Adam Firsht (Junior Boy and Year 7 respectively) were competing in the event for the first time. Joshua a talented 800m and 300m runner showed his versatility with a 5m plus Long Jump, 13.7 hurdles and nippy 2.07 800m to take the bronze medal. Adam came one place higher in the Year 7 competition running a competitive 2.25 to win the final event the 800m and complete a great day for the Firsht household.