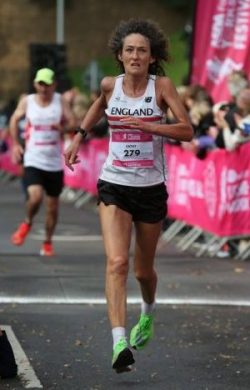 A report on Cathy’s astounding success at the York Marathon by Tom Ulliott:
Since 2017 England Athletics have offered Masters athletes the opportunity to represent their nation over a range of distances including road 10k, half marathon and marathon as well as the much more long-standing home countries cross country match.
With regards to the 2017 and onwards initiative for road running, teams are selected from each of a selection of regional events spread over the country at which athletes have to achieve both a qualifying time as well as placing in the top 3 for the 10k, 4 for the half marathon or 5 for the marathon in their respective age group.
The whole concept is mostly about recognition and reward rather than a true international selection as the competition in the representative match is against a combined Celtic Nations team of whom, to be honest, not too many athletes turnout. Nonetheless competition for England selection is fierce with most of the selection races resulting in large turnouts from very good quality English age group athletes and fast times being recorded.
For the 2019 marathon the representative race was the Yorkshire marathon held last week in York and athletes had to qualify from either the Chester, Manchester, Bournemouth or Brighton marathons. As far as the club is concerned, we managed to have two runners selected to run for England, myself in the V60 age group and Cathy Ulliott in the V55 category, both of us having qualified at Chester in Autumn 2018. The less said about my own run at York the better (DNF or at least had to walk the final 3 miles with an injury), but Cathy had an outstanding run.
For various reasons Cathy’s strategy on the day was one of caution as she chose to run safely at a pace she was confident with, as well as this she also had to make an unscheduled ‘pit stop’ during mile 8 which set her back in the field and she was 7th in her age group at the 180 degree switchback shortly after the half-way point. However, her early caution proved to be a wise strategy as she progressively moved through the field to overhaul many of her rivals, there were no less than 19 selected to run for England as well as a few others chosen from the combined Celtic nations. So strong was Cathy’s 2nd half that she was able to come home 3rd overall in her age group and outright V55 winner of the British Master’s marathon championship held in conjunction with this event. She ran the fastest 2nd half of all the V55 ladies including the overall winner. This result also ensures she has qualified to represent England again next year, also at York.
Added to this is the fact that Cathy was the first V55 lady at the Bournemouth half marathon just 2 weeks earlier and this event was one of the qualifying races for the England Age Group representative half marathon race planned for Fleet in March 2020.
Cathy now has the final hurdle of trying to gain selection for the Bristol 10k in May 2020 with the selection races being at either Telford in December or Chichester in February to repeat her achievement of making all three teams this year as well as next……………….watch this space.
For more information on qualifying for the England Age Group races visit http://englandmasters.org.uk/