Crawley AC triumphed to win both the girls’ and boys’ Sportshall League team titles at Horsham on Sunday, in the 35th year of the competition. However Brighton and Hove boys fought hard all the way and were the match victors in their competition for the second time in a row. Unfortunately their third places in the first two league matches behind Crawley and Horsham left them two points astray of the leaders. Final scores were Crawley – 18, Brighton – 16, Horsham -14, Haywards Heath – 8 and Chichester with 3 points.

The Crawley girls’ victory was emphatic. They won each of the four league matches gaining a maximum 20 points from Horsham with 15, Brighton -13, Haywards Heath – 7 and Chichester with 5.

There were three county records set on the day. Brighton’s Roxy Jones scored 85 to win the under 13 girls speed bounce. Crawley’s Alicia Borrill equalled Brighton’s Amber Anning’s under 13 Vertical Jump record of 67cms and Anning broke her own under 15 two lap time record with a time of 21.6 seconds.

A special guest, who competed in the very early days of Sportshall and still holds a county record, was invited to present the winners plaques. Lynne Crockett (née Draper) was a UK Sportshall champion and jumped 2.60m in the Standing Long Jump as an under 15. Lynne went on to represent England over 100m and now helps at Horsham. She was delighted to be back but declined the invitation to relive her glory days.

Horsham Blue Star’s John Linfield started the Sportshall League in 1981. On behalf of Sussex Athletics, Amber Anning publicly thanked John and all the team of officials, for enabling and supporting Sportshall to happen. Amber, who holds an unprecedented 10 County Sportshall records across the age groups, called up other Year 10 students who were competing in their last ever league match. Amongst the group were county champions, regional and national medallists. She asked the 9 and 10 year olds to keep doing Sportshall until they were as, “old as us.”

A special mention to our under 15 girls’. The team was heavily depleted and with only four athletes could not cover all the events. However we had four of the club’s best in Anna Dornbusch, Amber Pennington, Niamh Halloren and Amber Anning. Between them they won the 2-lap sprint, the 4-lap, the Standing Triple Jump, the Vertical Jump, Shot Put and the 4 x 2 relay. Well done girls you pulled out all the stops. 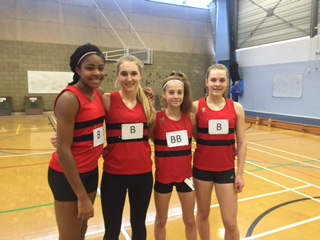 Thank you to all the athletes who have competed across all the age groups this season. Best wishes for the Summer – Remember the first open is at Crawley next month.