Brighton at the British Championships

The British Championships are the highest level of competition in the UK and athletes who are performing at the top level are invited.  Over the last few years there has been a low level of representation from Brighton and Hove Club.  This year 7 athletes from the Brighton & Hove City Athletic Club were invited; sadly Holly Turner and Matt Hewitt were unable to compete due to injury but the other 5 represented the club at this major event. 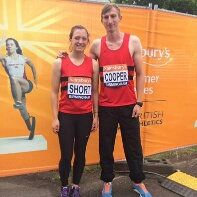 Will Gray continued his string of top performances and pulled out the best yet at this event coming 4th in a new pb knocking 4 seconds off his previous best.  A superb performance in a class field.

Anna Short is only a first year u20 athlete and was asked to compete with the likes of Jodie Williams in the 100m. She performed well and although she did not progress to the semi finals she did run very close to per pb.

There were 3 hurdlers who all found the step up to this level very challenging; Gwilym Cooper ran in the 400 hurdles and his very fast first 200 was his undoing as he found the second half of the raced very difficult but still ran well below 55 seconds.

Both Beth Close (u20) and Peter Moreno ran in the sprint hurdles but sadly both clipped the first hurdle and at this level of competition any error takes you out of contention.  Remarkably Peter ran 15.16 sec even though he hit a further 6 hurdles.

All these athletes are easily capable of performing at this or higher level for next year – we need more to join them.