Bob Willows is Coach of the Year 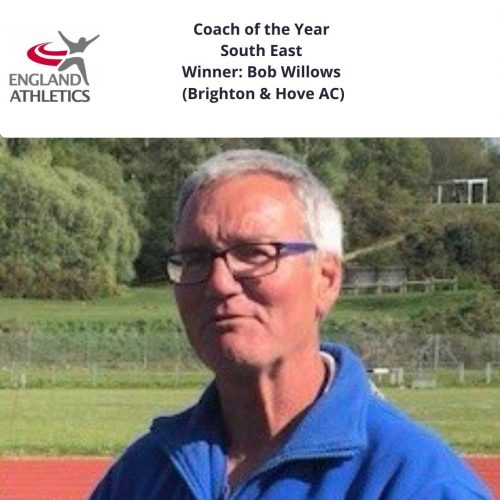 Congratulations to our own veteran throws coach and Club Secretary, Bob Willows, who is England Athletics South East “Coach of the Year” 2020. Bob heard the news in a virtual ceremony.  Here’s why he won:

Winner of the Coach of the Year award for the South East, Bob Willows of Brighton And Hove AC, is renowned not only for his athletes’ medals and records but also for always having a smile on his face ready to start a session.

He takes into account all his athletes’ strengths and weaknesses both as a team and as individuals and works with them all to help improve their performances. Bob has created a team bond with his jokes and support which helps the group to perform well season after season.

The atmosphere he has fashioned at training is something everyone warms to, both hardworking and competitive but also enjoyable. Bob makes all of his athletes feel involved and also gets supporters involved as well: multiple supporters of the group recently became Level 1 officials because Bob persuaded them that it would be beneficial to both the team and to the Club.

When anyone in the group feels down, he does his utmost to make them laugh or even smile a little. He then goes the extra mile, either after the session or the next morning, by calling the athlete to check in on how they are doing.

You can watch the moment Bob won and see a video of his athletes talking about why he’s a great coach on our Facebook page.