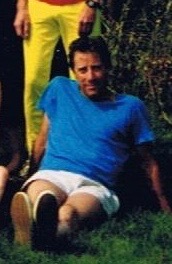 We are saddened to learn of the death of Bob Peel. He was a long standing club member and a regular in the cross country, track and road running teams of the 70s and 80s. Our condolences to Bob’s wife Judy and his many friends.

It is with much regret that I report the death of Bob Peel who passed away during the night of 3rd November. Bob had been admitted to Worthing Hospital having had a bad fall at home but then had a stroke in hospital from which he never recovered.

Bob joined Brighton & Hove AC in the mid-1970s, running his first race in a Sussex League event at Sompting, when the changing was in a village hall and the showers consisted of tin baths.

Bob was a talented runner with a fluent running style that was economical and easy on the eye. He had a Corinthian spirit and never took himself or his running too seriously. What was important was the camaraderie and the enjoyment he got from running on the Downs and doing the regular Sunday morning Stanmer Park run, and the Tuesday track session. He wasn’t able to put in the heavy mileage some of us did for he suffered from asthma and often ran with an inhaler. Indeed I can remember doing road races with him and he would walk the hills breathing heavily from his inhaler and then overtake me on the downhill section before arriving before me at the finishing line.

He was known for arriving at races late, often after the gun had gone off. He then had to catch everyone else up. His vest was well known to all – it was full of rusty holes from the pins of previous races. He was not one for athletic fashion and only changed his vest when it was absolutely necessary. Yet for all that, he was good enough to get in the Sussex team for the Inter County Cross Country Championships and was a regular in the Brighton & Hove team in the Southern Championships. His best performance was probably coming 89th in the Southern Cross Country Championships in 1987 at Trent Park when he was 7th scorer in a strong Brighton team.

Bob was a regular member of the Brighton & Hove ‘B’ team that ran the Southern League Division and the road race team. He enjoyed the many trips away whether they be to Bath to run the Half Marathon, to the 25 km in Dieppe or to the Isle of Wight for a camping weekend which involved a hilly 10 and an evening in the Crown at Shorwell. Once he reached 40, Bob was a regular in a very strong Brighton Vets team that won medals at both Southern and National Championships. 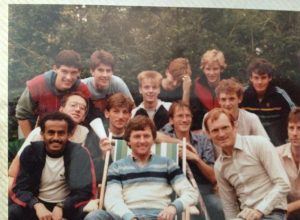 On trips away, Bob was always the first to begin the banter. He was a good runner, a great laugh, always happy – a real character. We will miss him.

He is survived by his wife Judy to whom we send our condolences.

Bob’s funeral is on 10th December at Clayton Wood Burial Ground. If anyone would like further details please contact Bob’s wife Judy jc.dwyer@ntlworld.com