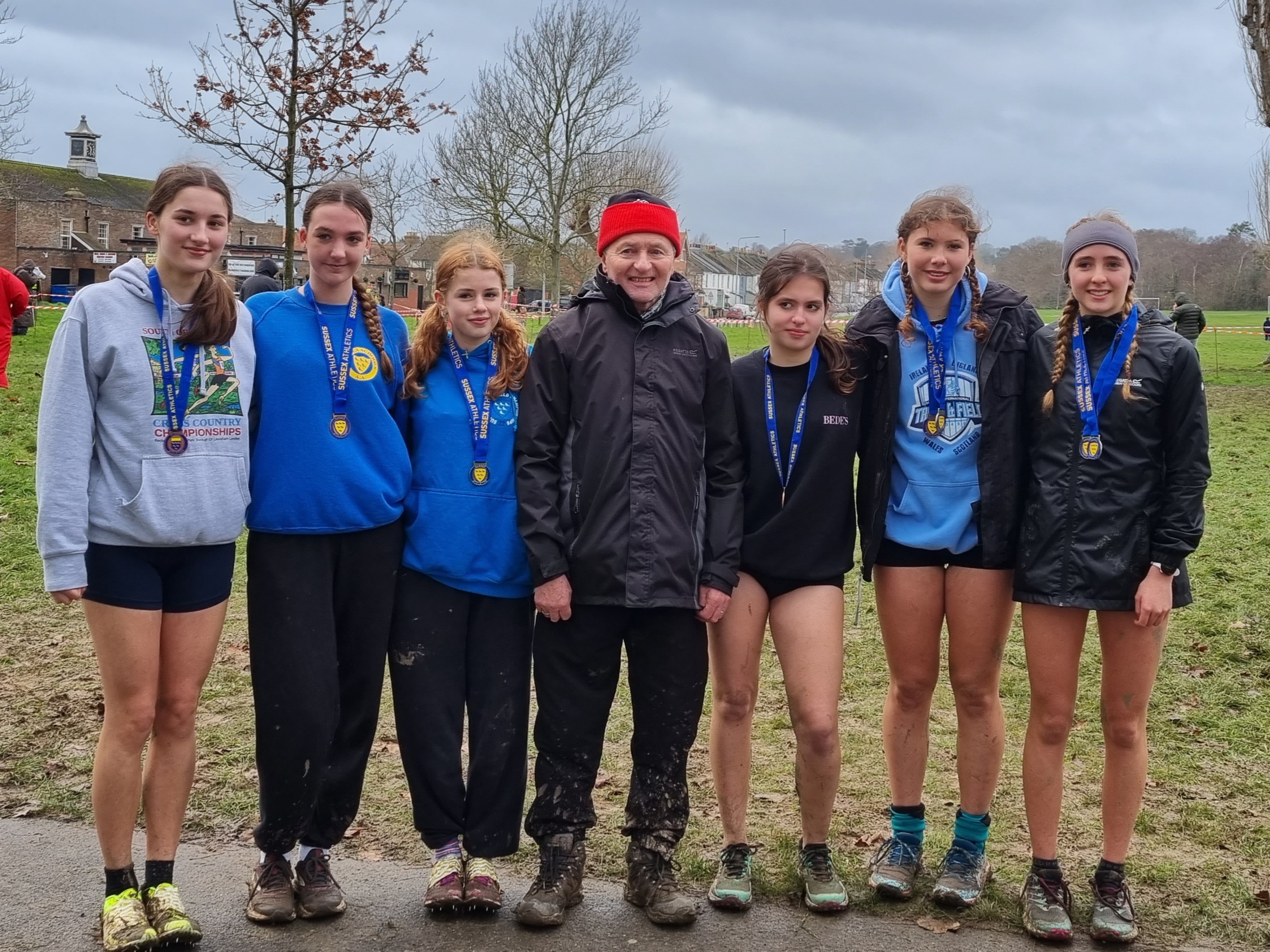 Report of the younger age groups by Pete Witcomb

Again, there were many outstanding individual and team results at the Sussex cross country championships at a muddy and windy Bexhill common. We won four team titles and had three individual winners. There was also a 3rd team place, and three of our ‘B’ teams came away with medals. For good measure, there were two silver and two individual bronze medallists, and a total of 31 medals came back to Brighton in the younger age groups. We had great depth and excellent support across all of our teams.

In the U15 girls race, Lara had her best run this season to lead the team home in 13th, and with Naomi 25th, Leily 28th and Angelina 30th, the team came seventh.

Finlay continued his fine form in the U15 boys race, winning his fourth race, and with Tom M in 3rd and the consistent Tom B in 8th, the team again were easy winners by 30 points. There was a close battle for the 2nd team with Freddie 11th, James 13th and Oliver 18th scoring the same points as the 3rd team and on countback with our 3rd scorer Oliver just ahead of the 3rd team’s scorer the ‘B’ team won the silver medals.

In the U17 men’s race, Brighton produced nearly half the field, and with Alex having an excellent run in 1st place, Charlie 5th and Jude 6th they were again clear team winners. The ‘B’ team, with Rowan in 7th, Jonathan 8th and Fionn 12th, won the bronze medal. Great backup with Rory just outside the medals in 13th, and with Reuben W. 20th, Ruben Di Carlo 21st and Reuben Omran 24th, the ‘C’ team came fifth.

The older age groups were all well represented. The U20 men’s A team of Matt Grindrod (2nd), Henry Yelling (5th) and Dante Oprandi (9th) collected the silver team medal and were backed up by Otis Farmer (11th) and Kit Monti (13th).

The U20 woman ran with the seniors Ciaria Muzio was 2nd U20 home and Allanah Clayton 7th.

The Senior Men came a very close to taking the title, just one point behind the winners, but had to settle for silver. The Team consisted of Ian Crowe-Wright (4th), James Turner (9th), Craig Halsey (13th), James Dicks (15th), Sam Wilkson (17th) and Howard Bristow (24th). They were backed up by Timmy Geddin (36th) and Liam Hurley (76th). The only senior woman on the day was Kathleen Law who has put in some great performances this year and on this occasion finished 9th!

A full report of the day can be found on the Sussex Athletics website.