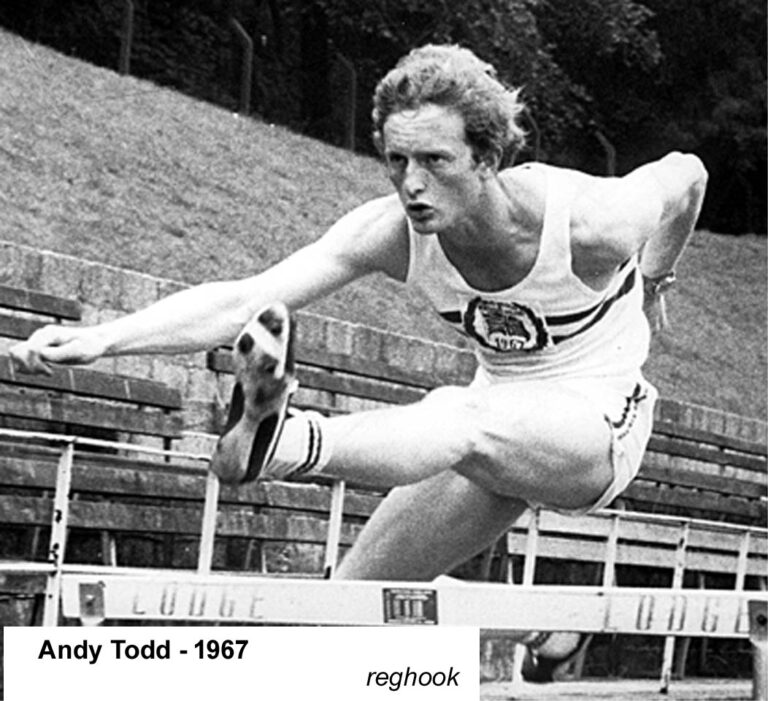 It is with great sadness that we share the news of the death of Andy Todd at 74, who was one of the most talented Brighton and Hove AC and Sussex athletes. He had a three-way heart by-pass and died following a further double by-pass last week.

An East Grinstead schoolboy and member of the Brighton & Hove club, he was a double English Schools’ champion and went to the Mexico Olympics as a member of the 4 x 400m relay team. Such was Todd’s talent that he was also a reserve for the 400-metre hurdles, the race where David Hemery smashed the World record and John Sherwood took the bronze medal. Unfortunately, Andy did not get a run in the Olympics.

With several Sussex and Sussex Schools’ titles under his belt, he won his English Schools titles in 1965 in the high hurdles and in 1967 he took the senior 440 yards flat title.

A tall and elegant athlete, Todd won numerous county, regional and national titles as he moved through the age groups. He frequently got the better of the future Commonwealth and European Gold medallist Alan Pascoe, and was a regular member of the Brighton & Hove Club League teams including the first Division 1 British League side.

Groin problems led to Andy’s early retirement from the sport at the tender age of 24. His work, in banking, took him and his family to Edinburgh where they lived for many years. Latterly they had settled in Chester. Andy Todd leaves a wife Linda and three grown-up children. We send our sympathy to Linda, Charlotte, Anna and Monty and all friends and family.