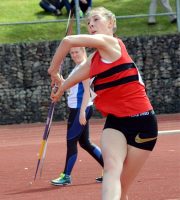 On the first Saturday of September Sussex leading under 15 and under 20 athletes travelled to Horspath, for the last South of England Inter County Championships fixture of the season. There were several Brighton & Hove athletes in the team and for a late season event there were many solid performances and several personal bests.

Sussex only had two winners and one of them was under-17, Lizzie Korczak, competing as an under-20.  Lizzie launched her javelin out to 43.33m for first place which was a near four metre improvement for her with the heavier implement. This takes her into seventh spot on the under 20-UK rankings this year.

Meanwhile under-15’s Rachael Wall and Amber Purcell were both second in the javelin (35.44m) and triple jump respectively. Purcell’s leap of 10.87m was a personal best.

Overall the under-20 team came sixth and the under-15 team was 11th.

Eighteen counties in total competed including Kent, Surrey, Berkshire and Hampshire and the mighty Essex who won both age group competitions. Each county could only select one athlete per event and just the top eight* athletes scored.