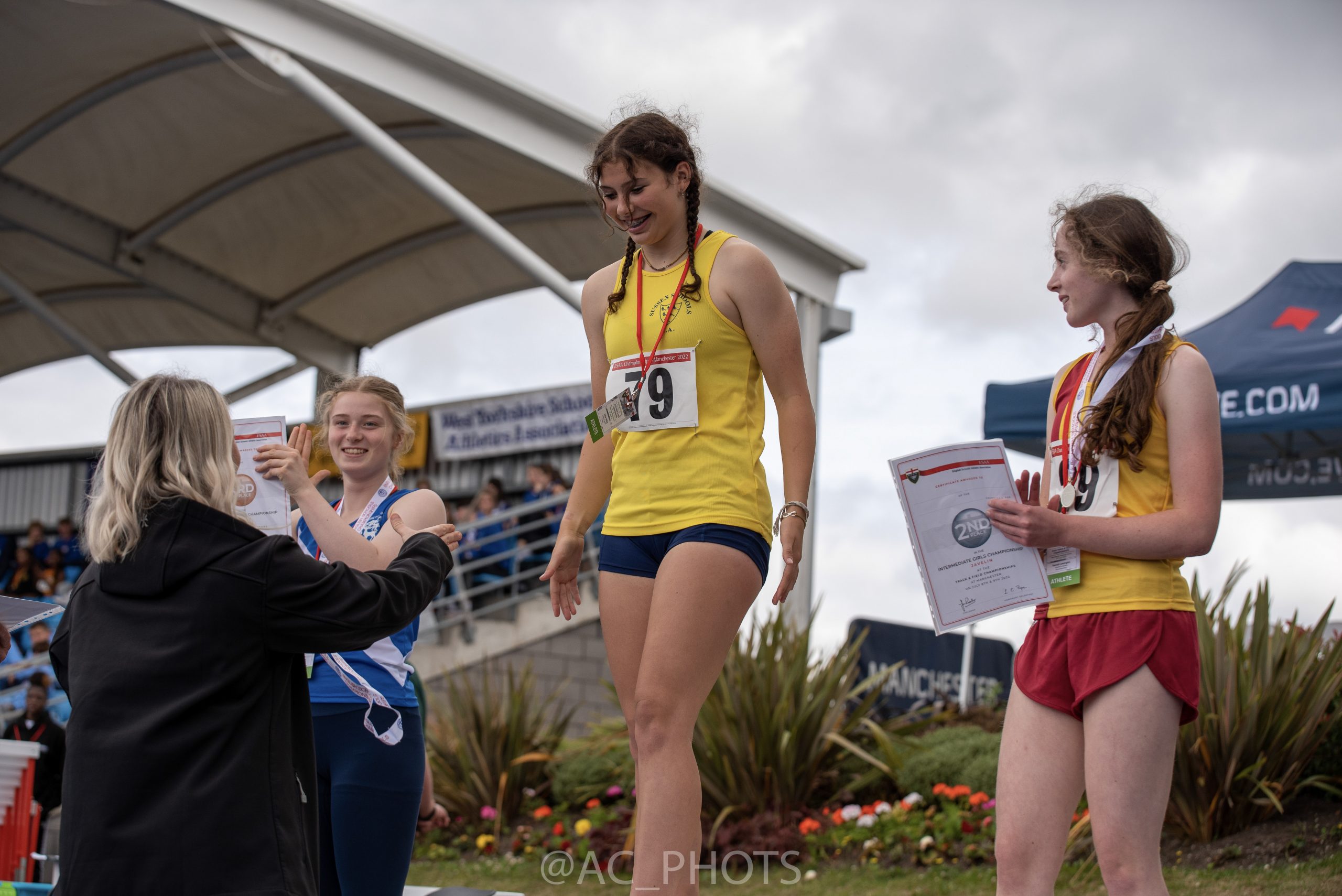 The sun shone for two days over Manchester as the Sussex Schools team delivered one of its best-ever performances at the English Schools Track and Field Championships. Sussex athletes brought home six golds, five silvers and three bronze medals, and overall, there were 17 personal bests, 23 English School standards and 10 national standard performances

Last year Dulcie Yelling (pictured above) was the silver medallist in the Junior Girls’ javelin competition. This time her main rival, Ayesha Jones, was on international duty at the European Under 18s in Israel, and Dulcie had one goal – to upgrade her medal. When she launched her javelin out to a personal best of 45.98m, she secured her place on top of the podium.

Stella Kalman was another of our young athletes who lifted her game to defy her pre-competition ranking. She improved her long jump personal best by five centimetres, leaping to 5.33m in the Junior Girls’ event, to capture the silver medal.

There was déjà vu for  Amber Purcell,  who triple jumped to a bronze medal in the Inter Girls’ competition with a jump of 11.14m. It was a double as Amber was the bronze medallist in the same age group and event last year.

Sussex had three podium near misses. In the Senior Boys’ triple jump, our own Massi Campbell  was 4th (14.09m).

There was a fifth-place finish for Charlie Fisher  who made it through the heats and semis of the Junior Boys’ 100m and ran 11.50s in the final. Club stalwart Freya Brennand was fifth in the Senior Girls hammer with 45.49m.

Rachael Wall fought through migraine for 8th in the Senior Girls’ javelin (40.42m).

The medal haul exceeded all expectations. Team Leader Judy Lasis described the squad as “amazing,” She said: “They were so responsive to the team managers. They all bought into the fact that we were a team and not just a collection of individuals. Their support and respect for each other and their environment, both in triumph and despair, were lovely to see. They even received praise from hotel staff and guests who commented that they were a credit to us! All the team managers really enjoyed taking them.”

Only the top eight athletes score for the team awards along with all English Schools and national standard performances. We await the final team results. However, you can see the full event results here.

Congratulations to all of our athletes who represented Sussex in 2022.